Joseph Compton Castner (November 18, 1869 - July 8, 1946) was a United States Army general. Castner commanded the Ninth Infantry Brigade in all its operations as a part of the Fifth Division, American Expeditionary Forces.

He was born in New Brunswick, New Jersey, November 18th, 1869. His father, Cornelius W. Castner, served as captain of one of New Brunswick's first companies in the American Civil War. In 1891, Castner graduated from Rutgers College (now Rutgers University ) with a degree in Civil Engineering. 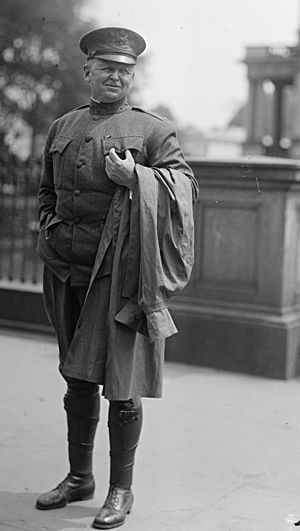 Prior to World War I, Castner had already distinguished himself. While a Lieutenant, he participated as an explorer in the Glenn Expedition in Alaska. In the Philippines, for his services with the Tagalog Scouts, he was promoted to a Captaincy in the Philippine Squadron of Cavalry, which commission he held until receiving a captaincy in the Regular Army. Later, he served as Constructing Quartermaster in both Honolulu and in Yellowstone National Park. While yet a Captain, he commanded the Second Battalion, Fourteenth Infantry, and under his training that battalion made an unequaled record in known distance firing. While a Major, he was Adjutant General of the District of Columbia Army National Guard, which he developed to a high state of efficiency. As Colonel of the Thirty-eighth Infantry, he instilled that fighting spirit which won for that regiment its fame as the "Rock of the Marne."

As Brigadier General, he took command of the Ninth Infantry Brigade. In the quiet Anould and St. Die sectors, he gave the units of the Brigade effective training for the big operations that were to follow. In the Battle of Saint-Mihiel, General Castner's brigade was at first in reserve with the Tenth Brigade in line. When passage of lines was made, he pushed his outpost lines up near to the Hindenburg Line. In the first phase of the Meuse-Argonne Offensive, his Brigade captured Cunel and drove the enemy from the Bois-de-la-Pultiere and the northwestern Bois-de-Foret. In the second phase of the Meuse-Argonne Offensive, Castner's Brigade captured Aincreville, Clery-le-Grand, Clery-le-Petit, Bois de Babiemont, the Punchbowl and Doulcon. Then the Brigade forced the difficult crossing of the river Meuse and fighting northward captured in succession Dun-sur-Meuse, Milly-devant-Dun, Lion-devant-Dun, Cote St. Germain, Château de Charmois, Mouzay, and the Foret de Woevre.

In appreciation for his services in the Meuse-Argonne Operation, Castner was awarded the Distinguished Service Medal.

He was cited in Fifth Division Orders. While his brigade formed part of the Army of Occupation, Castner took the course of instruction at the Army Center of Artillery Studies at Trier, Germany.

Castner retired while commanding Third Division in the Western States.

He died on July 8, 1946. He was buried at San Francisco National Cemetery.

Mount Castner and Castner Glacier, named in his honor, are both located in the area of Alaska that he explored in 1898.

All content from Kiddle encyclopedia articles (including the article images and facts) can be freely used under Attribution-ShareAlike license, unless stated otherwise. Cite this article:
Joseph Compton Castner Facts for Kids. Kiddle Encyclopedia.