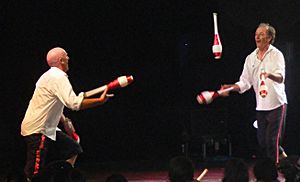 Haggis and Charlie at the 2009 Glastonbury Festival.

Many countries, cities or juggling clubs hold their own annual juggling convention or juggling festival. These are the backbone of the juggling scene, the events that regularly bring jugglers from a wide area together to socialize. The attendance of a convention can be anything from a few dozen to a few thousand people.

The principal focus of most juggling conventions is the main hall - where any participant can juggle freely, share and learn tricks, and try out multi-person passing patterns. Additionally, more formal "workshops" are often organized, in which expert jugglers work with small groups on specific skills and techniques. Most Juggling Conventions will also include a big show (open to the general public), competitions and juggling games. Many juggling conventions host some kind of Renegade Show, an open stage where anyone can, at short notice, get up and perform just about anything.

The Juggling Edge maintains a searchable database of past and upcoming juggling festivals and events.

Conventions can be split into three distinct types, though all call themselves "Juggling Conventions":

These last three to ten days and can attract between 150 and 5,500 people. Most attendees camp, pitching tents within the convention site, and this is covered by the cost of attendance. Onsite there are usually food tents, bar tents, various sports halls or large bigtops for juggling space. During the day there can be shows, workshops, games, parades and exhibitions. Every night there is entertainment provided in the forms of professional shows, open stages, late night stages, live music, parties and more. The largest festival style conventions are held in Europe.

Some notable festival style conventions are:

These are held in city center hotels or conference centers. They are invariably in North America and slightly more expensive than the European Juggling Convention. Camping is only rarely an option, as most are held in hotel convention centers. Notable conference-style conventions are :

Small, regional conventions that last up to two or three days. These usually attract between 25 and 250 people, have workshops throughout the day and a show in the evening of the main day. At these conventions accommodation and food is not normally provided. They are usually held in sports centres, schools or universities. Some notable one day conventions are:

The BJC occurs every spring, the IJC is staged over Passover, and the EJC and IJA are summer festivals. The BJC takes place in Britain, the IJC in Israel, and the EJC in Europe, as one might expect, but the IJA Festival has so far proven to be an exclusively North American event, despite it being the principal date in the calendar of the International Jugglers' Association.

Dates and locations of the four largest festivals

All content from Kiddle encyclopedia articles (including the article images and facts) can be freely used under Attribution-ShareAlike license, unless stated otherwise. Cite this article:
Juggling convention Facts for Kids. Kiddle Encyclopedia.