Julianne Alexandra Hough (born July 20, 1988) is an American dancer, actress and singer. She is a two-time professional champion of ABC's Dancing with the Stars. She was nominated for a Creative Arts Primetime Emmy in 2007 for Outstanding Choreography in season five of the show.

Her first leading acting role was in the 2011 film remake of Footloose. In September 2014, Hough joined Dancing with the Stars as a permanent fourth judge. Along with her brother Derek Hough (who is a six-time winner of the dancing show), she won the Primetime Emmy Award for Outstanding Choreography in 2015. In 2016, she played Sandy in the live Fox television production of Grease.

Hough was born in Orem, Utah, the youngest of five children in a Latter-day Saints (Mormon) family. Her brother, Derek Hough, is also a professional dancer. She also has three older sisters. 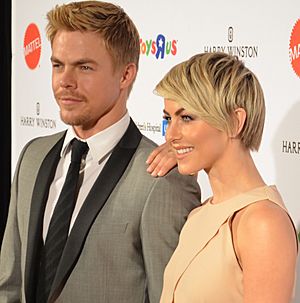 Hough's formal training began at the Center Stage Performing Arts Studio in Orem, she began dancing competitively at nine. In 1999, when she was 10, her parents sent her and brother Derek to London to live and study with their coaches, Corky and Shirley Ballas. Following in Derek's footsteps, she joined him at the Italia Conti Academy of Theatre Arts when a slot opened up at that school. They received training in song, theatre, gymnastics and many forms of dance, including jazz, ballet, and tap.

At 15, Julianne Hough became the youngest dancer, and only American, to win both Junior World Latin Champion and International Latin Youth Champion at the Blackpool Dance Festival. She left London that year and attended the Las Vegas Academy and Alta High School. 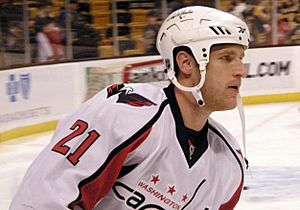 Brooks Laich whom Hough married in 2017

Hough has said she is no longer a practicing Mormon, but credits the faith for instilling her with a moral code.

Hough dated fellow country singer Chuck Wicks from August 2008 to November 2009; when the two had a mutual break-up, it inspired Hough's song "Is That So Wrong". Hough dated Ryan Seacrest from April 2010 to March 2013. In February 2014, it was revealed that she began dating NHL player Brooks Laich, of the Los Angeles Kings, formerly the Washington Capitals, in December 2013. The couple announced their engagement on August 18, 2015. They were married on July 8, 2017.

All content from Kiddle encyclopedia articles (including the article images and facts) can be freely used under Attribution-ShareAlike license, unless stated otherwise. Cite this article:
Julianne Hough Facts for Kids. Kiddle Encyclopedia.