Bernese Jura is the name for the French-speaking area of the Swiss canton of Bern, and from 2010 one of ten administrative divisions of the canton.

Comprising the three French-speaking districts in the northern part of the canton, it contains 40 municipalities with an area of 541.71 km2 (209.16 sq mi) and a population. More than 90% of the population of the three districts speak French. 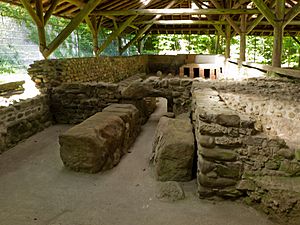 Baths at Engehalbinsel near Bern

Most of the territory of the Bernese Jura was passed from the County of Burgundy to the Bishopric of Basel in AD 999.

It was annexed by France during the Napoleonic period, 1798-1814. In 1814, the Congress of Vienna accorded it to the canton of Bern to compensate for the loss of the new canton of Vaud.

From 1815 to 1979, the term Bernese Jura also included the territory now forming the canton of Jura, which seceded following a national popular vote on 24 September 1978.

All content from Kiddle encyclopedia articles (including the article images and facts) can be freely used under Attribution-ShareAlike license, unless stated otherwise. Cite this article:
Jura bernois (administrative district) Facts for Kids. Kiddle Encyclopedia.