Jurong East MRT station (NS1/EW24/JE5) is an above-ground Mass Rapid Transit (MRT) interchange station on the North South Line and East West Line in Jurong East, Singapore. It is the terminus for the North South Line. It is located at the heart of the Jurong Lake District, within the vicinity of JCube, Jem, Westgate, IMM, Ng Teng Fong General Hospital and Jurong East Bus Interchange.

Currently, it is one of the three MRT interchange stations on the Singapore MRT/LRT network to be fully elevated; the other two being Tanah Merah MRT station and Choa Chu Kang MRT/LRT station. It is currently the only elevated station with a triple island platform. According to preliminary plan, Jurong East station is slated to become an interchange with the Jurong Region Line in 2027.

Originally known as Jurong Town, the station opened on 5 November 1988, as part of the first stage of Phase 2 of the system.

In 1999, upgrading work was carried out at Jurong East to cater to rising passenger volumes. Six existing openings between the concourse level and platform level were covered to make the platform more spacious. Construction cost $350,000 and took around 6 months to complete.

The Jurong East Modification Project (JEMP) was a key infrastructural upgrading project involving the construction of two new platforms and a new track at Jurong East, allowing two trains along the North South Line to enter and depart the station at the same time. Previously, trains had to take turns to arrive and depart from the station using a shared middle track. The new platforms and track allow for shorter train intervals, reducing waiting times and reducing the crowding in trains. 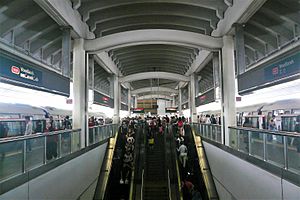 Two C151B trains at Woodlands, which is one of the most crowded stations of the line

Originally projected to be opened in 2012, then Minister for Transport, Mr Raymond Lim, announced on 12 February 2009 that the date was pushed forward by a year, to 2011. Construction started in 2009 and was completed and handed to the operator at around the first quarter of 2011, with the new platforms and track being tested since then, before the announcement on 16 May 2011 about its operation date on 27 May 2011.

All content from Kiddle encyclopedia articles (including the article images and facts) can be freely used under Attribution-ShareAlike license, unless stated otherwise. Cite this article:
Jurong East MRT Station Facts for Kids. Kiddle Encyclopedia.