The East West MRT Line was the 2nd Mass Rapid Transit line in Singapore. The line is currently 49.2 km long with 35 stations (4 to be built by 2016). It is the longest MRT line in Singapore and it is operated by SMRT Corporation. It takes about 1 hour to travel from end to end and this line is coloured green on MRT system maps.

The MRT line joins central Singapore to the western and eastern parts of the island, with another branch to Changi Airport from Tanah Merah. Transferring to the North South Line is done at Jurong East, City Hall and Raffles Place stations while transfer to the North East Line at Outram Park station is possible using a linkway. For Circle Line at Paya Lebar stations using an underpass and linkway. The future Downtown Line will interchange with the East West Line at the Bugis, Tampines and Expo MRT stations. 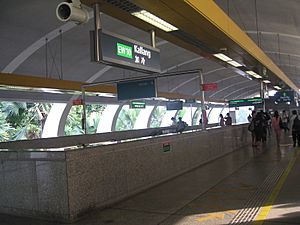 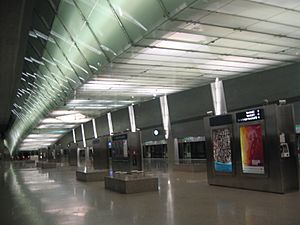 A view of the Changi Airport MRT Station

All content from Kiddle encyclopedia articles (including the article images and facts) can be freely used under Attribution-ShareAlike license, unless stated otherwise. Cite this article:
East West MRT Line Facts for Kids. Kiddle Encyclopedia.