The North South MRT Line was the first Mass Rapid Transit (MRT) line in Singapore. It is 44 km long and has 25 stations and it is being operated by SMRT Trains. It would usually take one hour to travel from one end of the MRT line to the other. This line is coloured red on the MRT Rail map.

This line joins the Central area of Singapore to the Northern and Southern areas of Singapore. To transfer to the East West MRT Line, a commuter can transfer at Jurong East, Raffles Place or City Hall. Transferring to the North East MRT Line is done at Dhoby Ghaut with a linkway. The Bishan MRT Station and Dhoby Ghaut MRT Station can transfer a commuter to the Circle MRT Line. 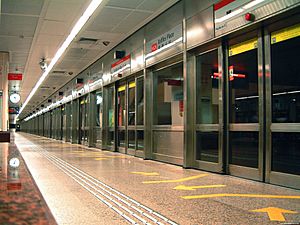 All content from Kiddle encyclopedia articles (including the article images and facts) can be freely used under Attribution-ShareAlike license, unless stated otherwise. Cite this article:
North South MRT Line Facts for Kids. Kiddle Encyclopedia.