City Hall MRT Station is a MRT station in Singapore, that has received very high loading all the while. It is named after the national monument - City Hall before National Gallery took over in 2015.

It is located in the Civic District in the Downtown Core, which is within the Central Area, the city centre of Singapore. It is situated underground, beneath the junction of Stamford Road and North Bridge Road, and is thus east of the Singapore River. The commercial district of Raffles Place and its respective station is located across the Singapore River.

Prior to the building of the station, it was called St Andrew's. It was renamed to City Hall for historical significance reasons in 1984.

On June 5, 2008, 280 youths spent the night at City Hall, learning how to deal with an emergency in a train tunnel. At around midnight, the young campers boarded a train and as the train departed, there was a simulated bomb explosion. They activated the detrainment ramps at both ends of the train, and evacuated to safety via an escape shaft. The students also used the items from their Ready Bags to "survive" the attack. 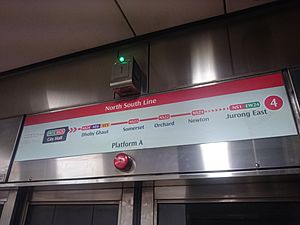 Label in City Hall Platform A of SGMRT

On the platform level of the station, it is a cross-platform interchange, similar to Singapore MRT's Raffles Place MRT Station, Bayfront MRT Station, some of the Hong Kong MTR's stations and Taipei Metro's stations.

City Hall is one of the four MRT stations to appear in the "Uniquely Singapore Edition" of the board game Monopoly. It was also mentioned in the 2009 film Whiteout.

All content from Kiddle encyclopedia articles (including the article images and facts) can be freely used under Attribution-ShareAlike license, unless stated otherwise. Cite this article:
City Hall MRT Station Facts for Kids. Kiddle Encyclopedia.