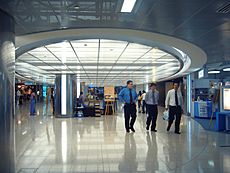 Raffles Place MRT Station is a Mass Rapid Transit (MRT) interchange station on the North South Line and the East West Line in Downtown Core, Singapore. It is directly underneath the centre of the financial area of Raffles Place, located in the Downtown Core area, south of the Singapore River. It is one of the more prominent and busier stations within Singapore's transport system during peak hours, especially being an interchange station located within the Central Area. The station has a large number of entrances/exits, the two main ones facing the Raffles Gardens, with the building being a miniature facade of the historic John Little building, just before the Telok Ayer and Downtown MRT Station came on board.

This station used to be the largest and deepest MRT station in Singapore, but the record was broken by Dhoby Ghaut in 2003 and then by Bras Basah in 2010, then by Promenade in 2013 which is 43 metres below ground. It is also one of the four MRT stations to appear in "Uniquely Singapore Edition" of the board game Monopoly.

All content from Kiddle encyclopedia articles (including the article images and facts) can be freely used under Attribution-ShareAlike license, unless stated otherwise. Cite this article:
Raffles Place MRT Station Facts for Kids. Kiddle Encyclopedia.