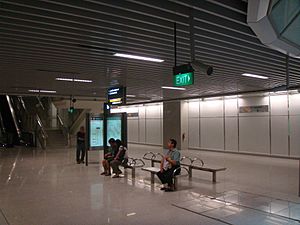 HarbourFront-bound platform level of Promenade MRT station.Notice the unused platform on the right, which was later converted to a transfer link-way to the Downtown Line platform.

Promenade Station (CC4/DT15) is an MRT Station in Singapore. It is an underground interchange station along Circle MRT Line and Downtown MRT Line. It is the deepest station in Singapore at 43 meters below ground. The deepest platform is at Basement 7.

All content from Kiddle encyclopedia articles (including the article images and facts) can be freely used under Attribution-ShareAlike license, unless stated otherwise. Cite this article:
Promenade MRT Station Facts for Kids. Kiddle Encyclopedia.