Expo MRT station is a Mass Rapid Transit (MRT) interchange station on the Changi Airport branch line of the East West line (EWL) and the Downtown line (DTL). This station is located along Changi South Avenue 1 at the junction of Expo Drive, in between Changi City Point and the Singapore Expo, in the Tampines planning area, Singapore.

The station is part of the current two-station branch line which extends from Tanah Merah to Changi Airport station. The plans to connect to Changi Airport were finalised in 1996 and construction began in 1999. The station opened on 10 January 2001, a year earlier than the Changi Airport station. It later became the terminus for the DTL upon the completion of Stage 3 of the line in 2017. On 25 May 2019, it was announced that the station will be incorporated as part of the Thomson–East Coast line (TEL) as it extends to the airport's Terminal 5 by 2040. 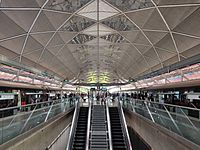 In 1994, there were plans to build a new rail connection to Changi Airport. The two-station branch, which included Expo station, was finalised through an announcement by then Deputy Prime Minister Lee Hsien Loong on 15 November 1996. The contract 502 for the constriction of Expo station was awarded to Penta-Ocean Construction Limited, which completed the station in 2000. As part of the President's Challenge 2001, a part of a charity walk goes through the tunnel between Expo and Changi Airport stations.

As with most of the above-ground stations built in the past along the EWL, the station was built without platform screen doors. Installation of the half-height screen doors (PSDs) started on 20 June 2011 and finished on 31 August, the last station on the EWL to have PSDs installed.

On 20 August 2010, it was announced that the Stage 3 of the DTL will terminate and interchange with the EWL at Expo station. Contract 922 for the design and construction of Expo station and the overrun tunnels was awarded to Samsung C&T Corporation at a sum of S$211.35 million (US$Wrong currency "2011" for Singapore million) in May 2011. On 28 November 2011, LTA marked the start of construction of Stage 3 of the DTL with a groundbreaking ceremony at this station.

To facilitate the construction for the Downtown line 3 Expo station and its tunnels, part of Changi South Avenue 1 towards Somapah Road and Changi South Avenue 2, together with a short section of Expo Drive were temporarily closed to traffic from 2 October 2011 to May 2017. The construction of the DTL station also involves the underpinning of two existing Expo MRT viaduct pier foundations. A transfer-beam was constructed before the excavation to support the two pillars and hydraulic jacks were installed on the transfer beam. It was followed by the cutting away of the existing pilers. The underpinning works were carried out successfully without disruption to the EWL operations.

On 31 May 2017, the Land Transport Authority (LTA) announced that the station, together with the rest of DTL3, will be opened on 21 October that year. Passengers were offered a preview of the station along with the other Downtown Line 3 (DTL 3) stations at the DTL 3 Open House on 15 October.

Incorporation into the TEL

On 25 May 2019, the LTA announced an extension of the (TEL) to Changi Airport. Set to be completed by 2040, The TEL will be extended from its current terminus at Sungei Bedok MRT station to serve the future Changi Airport Terminal 5, and the stretch between Tanah Merah and Changi Airport, which is currently part of the East–West line, will be transferred over to the Thomson-East Coast line. 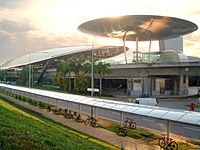 Exterior view of the EWL station

The elevated EWL station is designed by British architectural firm Foster and Partners. The station features two roofs overlapping one another — a stainless-steel roof over the concourse and ticket level 40 metres (130 ft) in diameter, and a 130-metre (430 ft) long titanium roof stretching over the platform level. The former reflects sunlight into the concourse which minimises the need for artificial lighting, while the latter deflects sun rays, which cools the platform by up to four degrees less than its surroundings. These materials for the roof were adapted to fit into warm tropical Singaporean climate.

The spacious interior of the station allows natural lighting and ventilation. Its futuristic design reflects the country's willingness to experiment with new ideas and technology, symbolising the "thriving world-class city" that Singapore was building for in the 21st century. 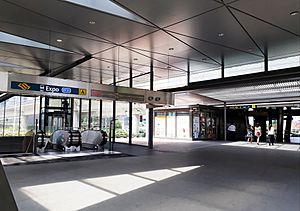 The station is an interchange station on the EWL and DTL. On the EWL, the station is between the Tanah Merah and Changi Airport stations on the Changi Airport branch. Train services to Expo station initially operated as a 2-station shuttle service from Tanah Merah station, then briefly converted to a through service from Boon Lay station when the branch extended to Changi Airport station. However, due to ridership falling below expectations, the service was reverted into shuttle mode on 22 July 2003. On the DTL, the station is the current terminus on the line, with the next station being Upper Changi station. When the DTL extends to Sungei Bedok in 2024, the next station will be Xilin station.

An artwork titled "A Banquet" by Yeo Chee Kiong is featured at the DTL station as part of the MRT network's Art-in-Transit programme. The massive 3D artwork depicts two reflective isometric chairs and a bulbous speech balloon to signify not only the importance of organic communication in an era of technological advancement and digital media but also the spirit of free trade. According to the sculptor, "Expo is where business is done, the speech balloons show the kind of conversations and dialogues which people have, and the chairs show where business takes place." With the surrounding colours of the station reflected in the artwork's shiny surfaces, it transformed them into two sets of magnificent kaleidoscopes which also symbolises cultural exchange.

All content from Kiddle encyclopedia articles (including the article images and facts) can be freely used under Attribution-ShareAlike license, unless stated otherwise. Cite this article:
Expo MRT station Facts for Kids. Kiddle Encyclopedia.