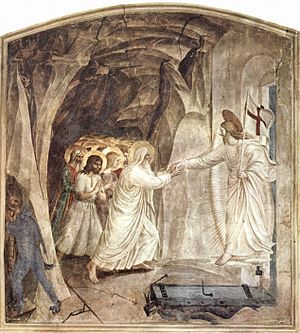 The Harrowing of Hell as depicted by Fra Angelico

In Christian theology, justification is God's act of pardoning someone's sins, because of their belief in Christ.

The idea of justification is found in several books of both the Old Testament, and New Testament. Protestants believe justification is the line that divided the Roman Catholics from the Protestants during the Reformation Martin Luther and other reformers taught that faith alone made a person right with God, apart from doing good works. However, they taught that after they were justified by faith, good works would follow. Catholics tended to stress that the good works were part of what made a Christian acceptable to God. In recent times these two positions have come closer together.

All content from Kiddle encyclopedia articles (including the article images and facts) can be freely used under Attribution-ShareAlike license, unless stated otherwise. Cite this article:
Justification (theology) Facts for Kids. Kiddle Encyclopedia.