Harrowing of Hell facts for kids 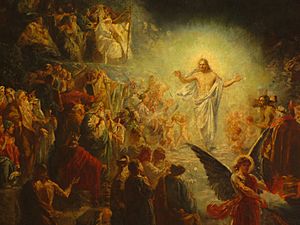 The Harrowing of Hell, in Christianity, is when Christ went down to Hell after his death on Good Friday, and helped many souls escape. It is mentioned in 1 Peter 3:18-22. It was a story used in the first of the English religious dramas written during the Middle Ages. The Bible does not say for sure if Christ really went to Hell or not.

All content from Kiddle encyclopedia articles (including the article images and facts) can be freely used under Attribution-ShareAlike license, unless stated otherwise. Cite this article:
Harrowing of Hell Facts for Kids. Kiddle Encyclopedia.