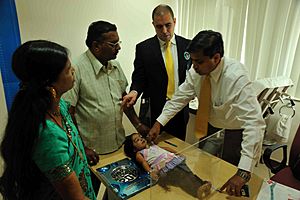 Jyoti Kisange Amge (born 16 December 1993) is an Indian actress notable for being the world's shortest living woman according to Guinness World Records.

Following Amge's 18th birthday on 16 December 2011, she was officially declared the world's shortest woman by Guinness World Records with a height of 62.8 centimetres (2 ft 0.6 in). Her restricted height is due to a genetic disorder called primordial dwarfism.

Amge was featured in the 2009 documentary entitled Body Shock: Two Foot Tall Teen. She was also a guest participant on Bigg Boss 6, an Indian television show. On 13 August 2014, she was cast in the fourth season of American Horror Story: Freak Show as Ma Petite.

In 2012, she met the world's shortest man, Chandra Bahadur Dangi of Nepal. The pair posed together for the 57th edition of the Guinness World Records.

Amge, together with Teo Mammucari, co-hosted Lo show dei record in 2012 on the Italian channel Canale 5.

In August 2014, Amge was cast in American Horror Story: Freak Show where she appeared as Ma Petite which premiered 8 October 2014. 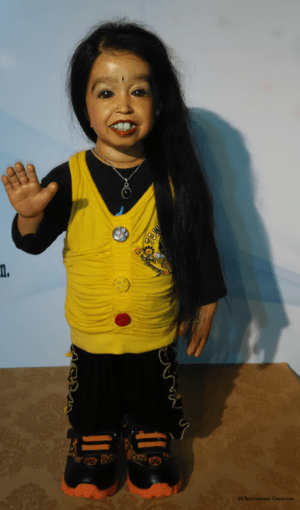 Amge participated with the Nagpur police to urge Indian citizens to stay at home during the COVID-19 lockdown in India.

All content from Kiddle encyclopedia articles (including the article images and facts) can be freely used under Attribution-ShareAlike license, unless stated otherwise. Cite this article:
Jyoti Amge Facts for Kids. Kiddle Encyclopedia.