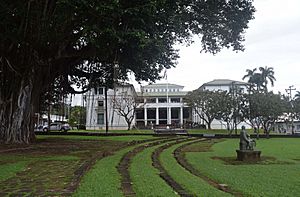 Kalakaua Park, with the view of U.S. Post Office (ZIP 96721) across Waianuenue Ave. 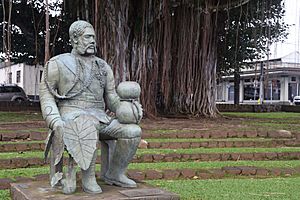 The Statue of King Kalakaua

Kalākaua Park is the central "town square" of the city of Hilo, Hawaii. It is surrounded by historic buildings and includes a war memorial.

The area was originally the site of the first Christian Mission in the area known as Waiakea Mission Station-Hilo Station in 1825. Later it evolved into the equivalent of a New England town square, surrounded by important civic buildings, such as the District Courthouse and Police Station, and the U.S. Post Office and Office Building.

After the annexation of Territory of Hawaii in 1898, the United States government needed to build a Federal office building, in Hilo, the second-largest city in the territory. However, funds were not available until 1913. Designed to include the post office at the time, it was built on the square from 1915 to 1917. It was designed by Henry D. Whitfield, who was Andrew Carnegie's brother-in-law. It was in the Mediterranean neoclassic style with some modern touches such as open circulation with a large arcade. Unusual for Hawaii, it had a full basement, a raised first floor with high ceilings for the post office, a second floor for Federal court functions, and a clerestory band of oriel windows above the courtroom for natural lighting.

In 1936, an addition in a similar style of was designed by Louis A. Simon to result in a "U" shape with two three-story wings. These were opened in 1938. The courtyard contains a flag pole, a mosaic-tiled fountain, and two decorative urns. In 1978 most postal functions moved to a new building. In a 1979 interior renovation, the courthouse was converted to federal office space.

A Vermont Danby Imperial white marble monument to those who died in World War II from the Island of Hawaiʻi was conceived in 1943 by the Hawaii Island Chamber of Commerce and completed in 1948. Charles William Dickey Associates were chosen as architects. They commissioned Sculptor Roy King of Honolulu to design and carve the monument. Donations came from the Hawaii American Legion Veterans, and Hawaii County. It is 10 feet (3.0 m) long, 4 feet (1.2 m) wide, and 6 feet (1.8 m) high. 157 names of Hawaiʻi Island World War II dead were inscribed on top. A lily pond reflects one side showing a central figure, a winged fighting man representing all combat forces. His wings signify protection and peace. On either side of him are people of the world living together in harmony. The back is inscribed “That their spirit may guide us to an ever living peace among all mankind.”

Two plaques were added to opposite ends of the monument. One in memory of Hawaii County’s honored dead from the Korean War inscribed “Our deaths are not ours, they are yours. They will mean what you make them. Whether our lives and our deaths were for peace and a new hope or for nothing we cannot say. It is you who must say this.” The other in memory of Hawaii County’s honored dead of the Vietnam War inscribed “We leave you our deaths. Give them their meaning. Give them an end to the war and a true peace. Give them a victory that ends the war and a peace afterwards.” Because of these additions, this monument is often referred to as the Korean War Memorial.

All content from Kiddle encyclopedia articles (including the article images and facts) can be freely used under Attribution-ShareAlike license, unless stated otherwise. Cite this article:
Kalakaua Park Facts for Kids. Kiddle Encyclopedia.