Kalangadoo is a small district in South Australia, Australia. It is about 50 km north of Mount Gambier, in the heart of red gum country. The area was originally proclaimed as Kalangadoo East in 1891, and the name changed to Kalangadoo in 1940. The aboriginal word means "Big trees in water." Today the small business district includes a general store, a farm supply store, a pub, and a timber mill. The disused railway station houses a small museum. At the 2006 census, Kalangadoo had a population of 305. 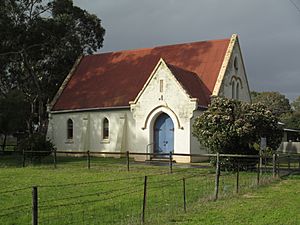 Kalangadoo is the centre of a rich agricultural district that specialises in potatoes and timber, as well as apple orchards, beef cattle, sheep and dairy cattle. The village flourished after the narrow gauge railroad arrived in 1887. It languished after World War II as farmers used their cars to shop in Penola and Mount Gambier. The Anglican Church of St Alban the Martyr is active, as are the Catholic church (built 1904) and the Presbyterian church (opened 1914). The Uniting Church opened in 1906 and closed in 2007, with its old buildings used for the weekly farmers' market. The public school established in 1892 reached a peak enrolment of 150 pupils in 1966, falling to 74 by 1991.

The historic Kalangadoo House, off the Kalangadoo-Nangwarry Road, is located on the South Australian Heritage Register.

All content from Kiddle encyclopedia articles (including the article images and facts) can be freely used under Attribution-ShareAlike license, unless stated otherwise. Cite this article:
Kalangadoo, South Australia Facts for Kids. Kiddle Encyclopedia.