Penola is a town in the Australian state of South Australia located about 338 kilometres (210 mi) southeast of the state capital of Adelaide in the wine growing area known as the Coonawarra. At the 2006 census, Penola had a population of 1,317.

It is known as the central location in the life of Mary MacKillop (St. Mary of the Cross), the first Australian to gain Roman Catholic sainthood, who alongside Julian Tenison Woods in 1866 established the first free Catholic school using the Woods/MacKillop Catholic education system in Australia, St. Joseph's School. Woods and MacKillop also established in Penola 'her' order of nuns, the Congregation of the Sisters of St Joseph of the Sacred Heart. The order, otherwise known as the 'Josephites' or 'Brown Joeys', continue to work with the poor and needy communities throughout the world today.

The first Europeans to the area were the Austin brothers who arrived in 1840 and established a run of 109 square miles (282 km²). The first settlers were Scottish-born Alexander Cameron and his wife Margaret in January 1844 after obtaining an occupation licence. In April 1850, Cameron obtained 80 acres (0.3 km²) of freehold land (his station was on a pastoral lease) and established the private town of Panoola, later known as Penola.

By 1850, he had built the Royal Oak Hotel and was doing much business supplying liquor to the many travelers passing through to the Victoria goldfields. Penola Post Office opened around 1852.

John Riddoch purchased Yallum in 1861. Riddoch grew up in poverty in the highlands of Scotland and in 1851 emigrated to try his luck on the Victoria goldfields. Within a few years he was a successful shopkeeper and wine merchant on the Geelong goldfields. He acquired 35,000 acres (142 km²) on which he ran 50,000 head of sheep.

It was Riddoch who planted the first grape vines and helped to diversify the pastoral economy of the area with an agricultural industry. In 1890, he established the Penola Fruit Growing Colony which was renamed Coonawarra in 1897.

In 2010, a strong tornado ripped through the township destroying at least four buildings and damaging many more.

Penola has a number of heritage-listed sites, including: 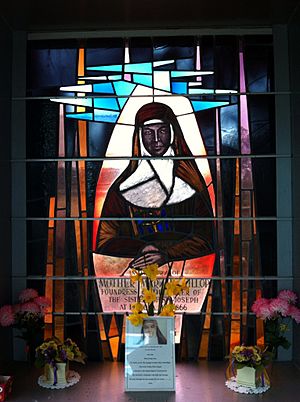 The Mary MacKillop Interpretive Centre is located in Penola. It is within close proximity to the two State Heritage sites of Petticoat Lane and the original stone schoolhouse developed by Mary MacKillop in conjunction with Father Julian Tenison Woods in the 1800s.

Penola is in the local government area of the Wattle Range Council. It is in the state electorate of MacKillop and the federal Division of Barker.

The town has an Australian Rules football team competing in the Kowree-Naracoorte-Tatiara Football League.

Penola is also the name of a high school in Melbourne, named after the South Australian town due to its link to its patron saint Mary MacKillop.

All content from Kiddle encyclopedia articles (including the article images and facts) can be freely used under Attribution-ShareAlike license, unless stated otherwise. Cite this article:
Penola, South Australia Facts for Kids. Kiddle Encyclopedia.