Kids Encyclopedia Facts
This page is about the town in South Australia. For other uses, see Coonawarra (disambiguation).

Coonawarra is a small town north of Penola in South Australia. It is best known for the Coonawarra wine region named after it.

Coonawarra was a station on the Mount Gambier railway line which opened in 1887. The Limestone Coast Railway tourist trains occasionally passed in the early 2000s, but there has not been traffic on the line since then. 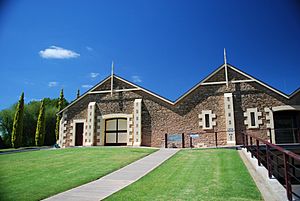 The township of Coonawarra is a few hundred metres west of the Riddoch Highway which passes along the ridge in the middle of the Coonawarra wine region. The historic Wynn's Coonawarra Winery in Memorial Drive is listed on the South Australian Heritage Register.

All content from Kiddle encyclopedia articles (including the article images and facts) can be freely used under Attribution-ShareAlike license, unless stated otherwise. Cite this article:
Coonawarra, South Australia Facts for Kids. Kiddle Encyclopedia.