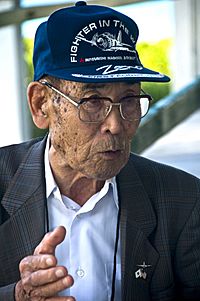 Kaname Harada (原田要code: ja is deprecated , 11 August 1916 – 3 May 2016) was a Japanese flying ace of World War II. He was known for shooting down as many as 19 Allied aircraft. Following the war, he worked as a farmer, before founding a kindergarten. He was an anti-war activist from 1991. He served in the Second Sino-Japanese War and in the Pacific War. He was born in Nagano Prefecture, Japan.

Harada died on 3 May 2016 in Nagano, Japan from multiple organ failure at the age of 99.

All content from Kiddle encyclopedia articles (including the article images and facts) can be freely used under Attribution-ShareAlike license, unless stated otherwise. Cite this article:
Kaname Harada Facts for Kids. Kiddle Encyclopedia.