Karl Hermann Frank (24 January 1898 – 22 May 1946) was a prominent Sudeten German Nazi official in the Protectorate of Bohemia and Moravia prior to and during World War II. Reaching the rank of Obergruppenführer (Supreme group leader), he was in command of the Nazi police in the Protectorate, including the Gestapo, the SD, and the Kripo. After the war, he was tried, convicted and executed for his role in organizing the massacres of the people of the Czech villages of Lidice and Ležáky.

Born in Karlsbad, Bohemia in Austria-Hungary, Czech Republic), Frank was taught by his father. An extreme advocate of the incorporation of the Sudetenland into Germany, Frank joined the German National Socialist Workers' Party. In 1925, Frank opened a book store which specialized in National-Socialist literature. Frank joined and helped organize the Sudeten-German Homeland Front (SdH) in 1933, which officially became the Sudeten German Party (SdP) in 1935. He then worked in the SdP public relations and propaganda department.

In 1935, Frank became deputy leader of the SdP and was elected a member of the Czechoslovak Parliament. Coming to represent the most radical National Socialists in the SdP, Frank was made Deputy Gauleiter of the Sudetenland when it became part of Germany in October 1938. Frank officially joined the Nazi Party and SS on 1 November 1938. 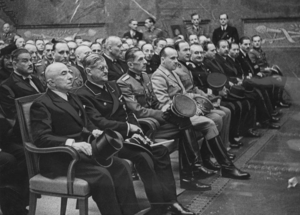 Frank was arrested by U.S. Army troops in the area of Rokycany on 9 May 1945. He was extradited to the People's Court in Prague and tried in 1946. After being convicted of war crimes and the destruction of Lidice and Ležáky, Frank was sentenced to death. He was executed on 22 May 1946 in the courtyard of the Pankrác Prison in Prague, before 5,000 onlookers. He was buried in an anonymous pit at Prague's Ďáblice cemetery.

Frank was married twice. On 21 January 1925 he married Anna Müller. The couple had two sons. They divorced in 1940. On 14 April 1940 Frank remarried a physician, Karola Blaschek. The couple had three children together.

All content from Kiddle encyclopedia articles (including the article images and facts) can be freely used under Attribution-ShareAlike license, unless stated otherwise. Cite this article:
Karl Hermann Frank Facts for Kids. Kiddle Encyclopedia.