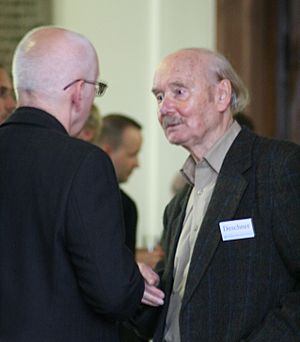 Karl Heinrich Leopold Deschner (23 May 1924 – 8 April 2014) was a German researcher, humanist, activist and writer. He was known in Europe for his in-depth and strong dislike towards Christianity in general and the Catholic Church. This was the subject of many of his articles and books. His best known work was the 10 volume opus Christianity's Criminal History (Kriminalgeschichte des Christentums, Rowohlt Verlag GmbH, Reinbek). He was born in Bamberg, Bavaria, Weimar Republic.

All content from Kiddle encyclopedia articles (including the article images and facts) can be freely used under Attribution-ShareAlike license, unless stated otherwise. Cite this article:
Karlheinz Deschner Facts for Kids. Kiddle Encyclopedia.