Kay Bailey Hutchison (born Kathryn Ann Bailey; July 22, 1943) is an American attorney, television correspondent, politician, and diplomat who is the 22nd United States Permanent Representative to NATO. A member of the Republican Party, she previously was a United States Senator for Texas from 1993 to 2013.

Born in Galveston, Texas, Hutchison is a graduate of the University of Texas at Austin. Prior to entering politics, she was an attorney and legal correspondent at KPRC-TV in Houston. She was a member of the Texas House of Representatives from 1972 to 1976. After a brief business career, she returned to politics in 1990 when she was elected Texas State Treasurer. In 1993, she was elected to the United States Senate in a nonpartisan special election against Democrat Bob Krueger and became the first woman senator in Texas history.

After being reelected to the Senate in 1994, 2000, and 2006, Hutchison was an unsuccessful candidate for Governor of Texas in 2010, losing the Republican primary to incumbent Rick Perry. Hutchison was the most senior female Republican senator by the end of her tenure in 2013, and the fifth most senior female senator overall. In 2013, she joined the law firm Bracewell & Giuliani.

In 2001, she was named one of the thirty most powerful women in America by the Ladies Home Journal. 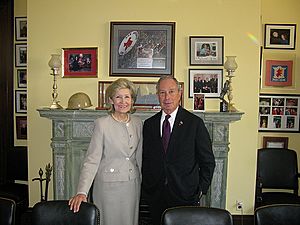 Hutchison is the daughter of Kathryn Ella (née Sharp) and Allan Abner Bailey Jr., an insurance agent. She has two brothers, Allan and Frank. Hutchison grew up in La Marque, Texas.

Following her graduation from law school, she was the legal and political correspondent for KPRC-TV in Houston. Hired by Ray Miller, host of the long-running The Eyes of Texas anthology series, Hutchison was among the first on-screen newswomen in Texas. 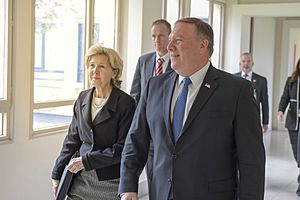 On June 29, 2017, Hutchison was nominated by President Donald Trump to be the United States Permanent Representative to NATO. The U.S. Senate confirmed her nomination by voice vote on August 3, 2017. Hutchison was sworn in on August 15, 2017, and started the position on August 28, 2017.

On October 2, 2018, Hutchinson suggested NATO would consider destroying Russian medium-range nuclear systems if Russia continued development on those systems, which would be an act of war under international law. 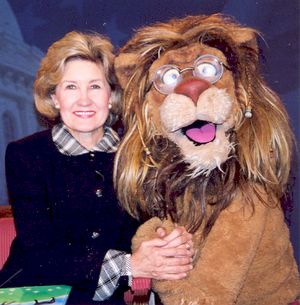 Hutchison and her family have their primary residence in Belgium. She had a second house in Virginia, where she lived when the U.S. Senate was in session. In August 2009 she put her Virginia house up for sale. She has also purchased a house in Nacogdoches, Texas. She is a supporter of the Multiple Myeloma Research Foundation where she is an honorary board member.

All content from Kiddle encyclopedia articles (including the article images and facts) can be freely used under Attribution-ShareAlike license, unless stated otherwise. Cite this article:
Kay Bailey Hutchison Facts for Kids. Kiddle Encyclopedia.