Keetmanshoop is a city in the Karas Region of southern Namibia, lying on the Trans-Namib Railway from Windhoek to Upington in South Africa. It is named after Johann Keetman, a German industrialist and benefactor of the city.

Keetmanshoop has a hot desert climate (Köppen climate classification BWh), with long, very hot summers and mild to warm winters. The annual average rainfall is only 159 mm (6 in). Keetmanshoop is one of the sunniest places year-round on the planet with a mean sunshine duration over 3,870 h yearly or 10.7 sunny hours daily or well above 87% of the time. The annual mean temperature is 21.1 °C (70.0 °F) with a mean annual high of 28.8 °C (83.8 °F) and a low of 13.3 °C (55.9 °F). The climate is characterized by sunshine and dryness as well as moderate heat all year long. 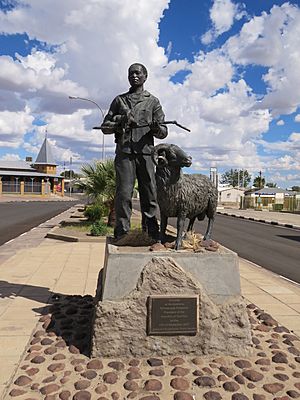 A monument in Keetmanshoop, Namibia

All content from Kiddle encyclopedia articles (including the article images and facts) can be freely used under Attribution-ShareAlike license, unless stated otherwise. Cite this article:
Keetmanshoop Facts for Kids. Kiddle Encyclopedia.