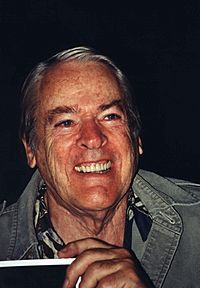 Kevin McCarthy (February 15, 1914 – September 11, 2010) was an American actor. He was born in Seattle, Washington, but raised in Minneapolis, Minnesota. He was known for his role in the horror science fiction movie Invasion of the Body Snatchers (1956). He was also known for his role as Biff Loman in Death of a Salesman (1951), which won him a Golden Globe Award.

McCarthy died of pneumonia at his home in Hyannis, Massachusetts on September 11, 2010, aged 96.

All content from Kiddle encyclopedia articles (including the article images and facts) can be freely used under Attribution-ShareAlike license, unless stated otherwise. Cite this article:
Kevin McCarthy (actor) Facts for Kids. Kiddle Encyclopedia.