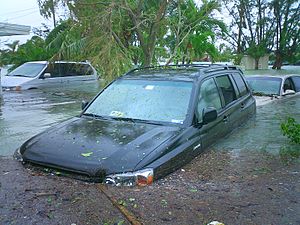 Key Haven is an unincorporated community on Raccoon Key, an island in the lower Florida Keys about a mile (1.6 km) east of the island of Key West. It is a suburb of greater Key West, and houses around a thousand residents. The city limits of Key West on northern Stock Island are separated from Key Haven by a channel about a quarter mile (400 m) wide.

It lies off the northeast side of Stock Island, and is connected by fill to U.S. 1 (the Overseas Highway) via Key Haven Road, its primary road, just east of mile marker 5.

Key Haven was chosen as the location of The Real World Key West, which appeared in 2006. The Real World home is located at the end of Driftwood Drive.

All content from Kiddle encyclopedia articles (including the article images and facts) can be freely used under Attribution-ShareAlike license, unless stated otherwise. Cite this article:
Key Haven, Florida Facts for Kids. Kiddle Encyclopedia.