The Key West Aquarium is the only public aquarium in Key West, Florida, United States. It is located at 1 Whitehead Street and is marked by Historic Marker 52. 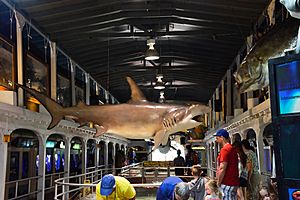 Built between 1932 and 1934, the Key West Aquarium is one of Florida's oldest aquariums. Original admission was 15 cents for adults and 5 cents for children.

The aquarium was conceived by Dr. Robert Van Deusen, the Director of the Fairmount Park Aquarium in Philadelphia. The aquarium was originally an open air aquarium, one of the first and largest at the time.

During the Great Depression, Key West turned over its charter to the federal government due to the economic disaster that hit the island. The federal government believed that Key West's weather and location would make it an ideal tourist destination. The Works Project Administration (WPA) was sent in and built the tourist attraction.

The aquarium is home to exhibits on alligators, atlantic shore fish, jellyfish, sharks, sea turtles, and a touch tank.

All content from Kiddle encyclopedia articles (including the article images and facts) can be freely used under Attribution-ShareAlike license, unless stated otherwise. Cite this article:
Key West Aquarium Facts for Kids. Kiddle Encyclopedia.