Ki no Tsurayuki facts for kids 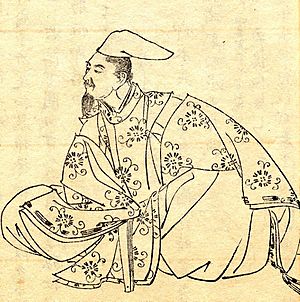 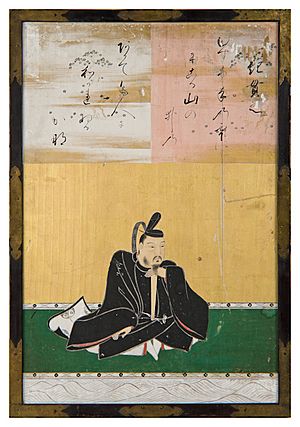 Ki no Tsurayuki by Kanō Tan'yū, 1648
In this Japanese name, the family name is Ki.

Ki no Tsurayuki (紀 貫之code: ja is deprecated , 872 – June 30, 945) was a Japanese author, poet and courtier of the Heian period. He is best known as the principal compiler of the Kokin Wakashū, also writing its Japanese Preface, and as a possible author of the Tosa Diary, although this was published anonymously.

Tsurayuki was a son of Ki no Mochiyuki. In the 890s he became a poet of waka, short poems composed in Japanese. In 905, under the order of Emperor Daigo, he was one of four poets selected to compile the Kokin Wakashū, the first imperially-sponsored anthology (chokusen-shū) of waka poetry.

He is well known for his waka and is counted as one of the Thirty-six Poetry Immortals selected by Fujiwara no Kintō. He was also known as one of the editors of the Kokin Wakashū. Tsurayuki wrote one of two prefaces to Kokin Wakashū; the other is in Chinese. His preface was the first critical essay on waka. He wrote of its history from its mythological origin to his contemporary waka, which he grouped into genres, referred to some major poets and gave a bit of harsh criticism to his predecessors like Ariwara no Narihira.

His waka is included in one of the important Japanese poetry anthologies, the Hyakunin Isshu, which was compiled in the 13th century by Fujiwara no Teika, long after Tsurayuki's death. 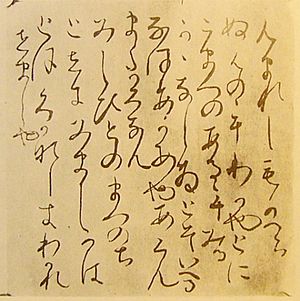 Besides the Kokin Wakashū and its Japanese preface, Tsurayuki's major literary work was the Tosa Nikki (土佐日記code: ja is deprecated , "Tosa Diary"), which was written using kana. The text details a trip in 935 returning to Kyoto from Tosa Province, where Tsurayuki had been the provincial governor.

Tsurayuki's name is referred to in the Tale of Genji as a waka master. In this story, Emperor Uda ordered him and a number of female poets to write waka on his panels as accessories.

All content from Kiddle encyclopedia articles (including the article images and facts) can be freely used under Attribution-ShareAlike license, unless stated otherwise. Cite this article:
Ki no Tsurayuki Facts for Kids. Kiddle Encyclopedia.