Ariwara no Narihira facts for kids 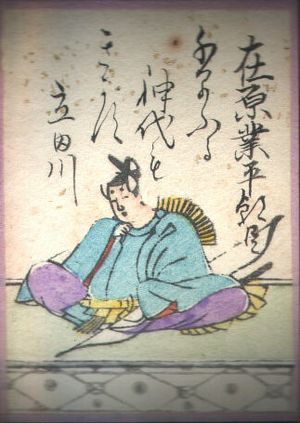 Ariwara no Narihira (在原業平, 825 - 9 July 880) was a Japanese poet and noble. He was the fifth son of Prince Abo, a son of Emperor Heizei. His mother Princess Ito was a daughter of Emperor Kammu, so he was family to Emperor Kammu by both his mother and father. Along with his other brothers, he was forced to have a civilian life and did not live in the Imperial Court, getting a new clan name, Ariwara.

All content from Kiddle encyclopedia articles (including the article images and facts) can be freely used under Attribution-ShareAlike license, unless stated otherwise. Cite this article:
Ariwara no Narihira Facts for Kids. Kiddle Encyclopedia.