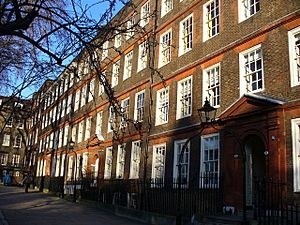 King's Bench Walk is a street in Temple, in the City of London. It is mainly made up of barristers' chambers.

King's Bench Walk is located in the Inner Temple, one of the four Inns of Court. The other three Inns of Court are Middle Temple, Lincoln's Inn and Gray's Inn. The area borrows its name from the Order of the Poor Knights of the Temple of Solomon, more commonly known as the Knights Templar which is a historical western Christian military order that was established in 1118AD.

In 1162 the Templars purchased the grounds now known as Temple to be used as their new, larger headquarters. One of the oldest structures still remaining is the Temple Church which was consecrated in 1185. The Temple Bar gateway which stands outside the Royal Courts of Justice and marks the point between Westminster and the City of London also takes its name from the historical Order.

Following the downfall of the Knights Templar in 1307 and its dissolution by Pope Clement V in 1312, the grounds were given to the Knights Hospitaller, Order of St John. It was during the 14th century whilst the Temple was still in Hospitaller possession that two colleges of law were founded within its grounds. By 1388, two distinct societies had formed and they were known as Inner Temple and Middle Temple. Since then, the Temple has been associated with the legal profession and the Bar. 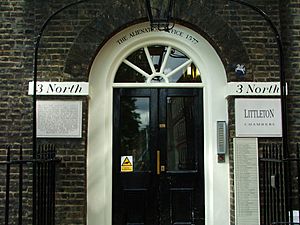 Before the fires of 1666 and 1677, 4 King’s Bench Walk, with what is now 5 and 6 King's Bench Walk was known as King's Bench Buildings. 4 King's Bench Walk is located opposite the Inner Temple Library. Like the other buildings on the row, it was rebuilt in 1678 following the London fire of 1677. The building bears an inscription that documents these events;

The inscription can be seen on four separate tiles divided by doric triglyphs placed above the arched doorway to number four which also mentions Richard Powell being treasurer of the Inner Temple when 4 King's Bench Walk was rebuilt in 1678.

The archway is ascribed to Sir Christopher Wren, one of the most highly acclaimed English architects in history who is most recognised for designing St Paul’s Cathedral on the top of Ludgate Hill. More of his architectural work can be seen on the eastern end of Fleet Street, namely St Brides Church which boasts the tallest steeple to be designed by Wren. 4 King’s Bench Walk is one of the few fortunate buildings in the Inner Temple to have escaped destruction by enemy action during the second world war.

In addition, the signature "Thos Dainand", dated "March 19, 1793", has been scratched into one of the window panes of the first-floor library. 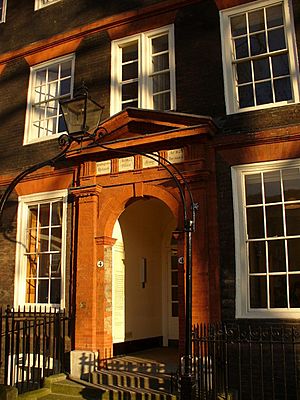 4 King's Bench Walk has been home to various sets of barristers over the years. The principal set in the building is the Chambers of Timothy Raggatt QC, a common law set with around 55 members practising in all areas of the law. There have been a number of other sets also in occupancy of the building, but none of them have been able to compete with the dominance of this common law set. Those smaller sets include that headed by Christopher Van Hagen, who assumed the role of Head of Chambers on 29 April 2003 from the former Head of Chambers, Robert Rhodes QC. Prior to Robert Rhodes QC, the Head of Chambers was Mr Peter Heppel QC, who was appointed to the circuit bench and former Recorder (judge) of Hull. The current Head of Chambers at the smaller set identifying itself as 4KBW but taking up only a small amount of the space is Lawrence Power. The building has been divided over time and also houses private residence on the top floor. Notable residents of number four were Sir Harold George Nicolson KCVO CMG, an English diplomat, author, diarist and politician and Sir Ralph Norman Angell, an English lecturer, journalist, author, and Member of Parliament.

King's Bench Walk is mentioned in numerous novels such as Charles Dickens' A Tale of Two Cities:

"After a few dull efforts to get to sleep again, which the man dexterously combated by stirring the fire continuously for five minutes, he got up, tossed his hat on, and walked out. He turned into the Temple, and, having revived himself by twice pacing the pavements of King's Bench-walk and Paper-buildings, turned into the Stryver chambers."

King's Bench Walk has specific mention in chapter one of the novel The Red Thumb Mark by R. Austin Freeman. The novel forms part of a series of detective stories featuring the medico-legal forensic investigator Dr. Thorndyke;

"Conflagratam Ano 1677. Fabricatam Ano 1698. Richardo Powell Armiger Thesaurar." The words, set in four panels, which formed a frieze beneath the pediment of a fine brick portico, summarised the history of one of the tall houses at the upper end of King's Bench Walk and as I, somewhat absent mindedly, read over the inscription, my attention was divided between admiration of the exquisitely finished carved brickwork and the quiet dignity of the building, and an effort to reconstitute the dead and gone Richard Powell, and the stirring times in which he played his part."

In The Squire of Alsatia, Thomas Shadwell refers to King's Bench Walk in its previous form, as King's Bench Buildings:

"I have been at your brother's house, and they say he is come to some lawyer's chamber in the King's Bench Buildings"

All content from Kiddle encyclopedia articles (including the article images and facts) can be freely used under Attribution-ShareAlike license, unless stated otherwise. Cite this article:
King's Bench Walk, London Facts for Kids. Kiddle Encyclopedia.