Kitarō (February 4, 1953), is a Japanese recording artist, composer, record producer, and arranger noted for his electronic-instrumental music, and is often associated with and regarded as one of the most prominent musical acts of New-age music.

He is the winner of a Grammy Award for Best New Age Album Thinking of You (1999); with a record 16 nominations in the same category and a Golden Globe Award for the Heaven & Earth (1993) original score.

In 2007 to 2009, he launched the "Love and Peace World Tour," an international tour with which Kitaro hoped to inspire his message of world peace with his music. 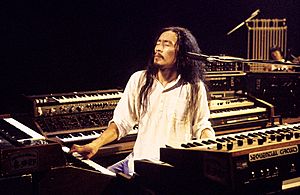 Masanori Takahashi was born in Toyohashi, Aichi, Japan, and is a graduate of Sahid University. Kitarō, which is his boyhood name meaning "man of love and joy", a practicing Buddhist himself, was born in a family of Shinto-Buddhist farmers. After graduating his parents were first opposed to the idea of their son having a musical career. In an effort to maneuver him towards their vision, they made arrangements for him to take a job at a local company. In return, he did not show for the job without telling them, and managed to convince them to work on something he loved.

In high school Kitarō played electric guitar in a band that played American rhythm and blues of Otis Redding and covers by The Beatles. After graduating, and learning to play drums and bass, Kitaro moved to Tokyo to experience and become a part of the music scene, and it was there that he discovered the synthesizer. His first synthesizer was analog. 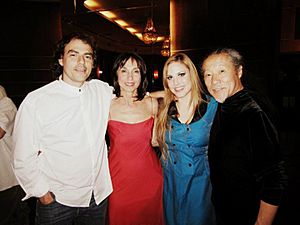 In the early 1970s he changed completely to keyboard and joined the Japanese progressive rock band Far East Family Band and recorded four albums with them. While in Japan and Europe in 1975, he met the German electronica and former Tangerine Dream member Klaus Schulze. Schulze produced two albums for the band and gave Kitaro some tips for controlling synthesizers. In 1976, Kitaro left Far East Family Band and travelled through Asia (China, Laos, Thailand, India).

Back in Japan, Kitaro started his solo career in 1977. The first two albums Ten Kai and Daichi were released in 1978 and 1979. He performed his first symphonic concert at the "Small Hall" of the Kosei Nenkin Kaikan in Shinjuku, Tokyo. 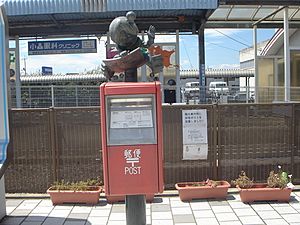 He was married to Yuki Taoka, daughter of Kazuo Taoka. They have a son. In the early 1990s he moved from Japan to the United States. In the mid-1990s, he married Keiko Matsubara, a musician who played on several of his albums.

All content from Kiddle encyclopedia articles (including the article images and facts) can be freely used under Attribution-ShareAlike license, unless stated otherwise. Cite this article:
Kitarō Facts for Kids. Kiddle Encyclopedia.