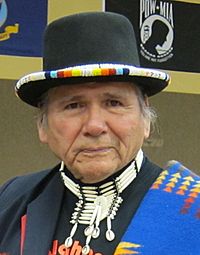 Dennis Banks (April 12, 1937 – October 29, 2017) was a Native American leader, teacher, lecturer, activist, actor and author. He was an Anishinaabe born on Leech Lake Indian Reservation in northern Minnesota. Banks was also known as Nowa Cumig. His name in the Ojibwe language means "In the Center of the Universe". He was a longtime leader of the American Indian Movement, which he co-founded in 1968 with Native Americans in Minneapolis.

In August 2016, Banks received the vice presidential 2016 election nomination of the Peace and Freedom Party, a socialist political party with ballot access in California. He appeared on the California ballot with presidential nominee Gloria La Riva.

Banks died of complications from pneumonia on October 29, 2017 in Rochester, Minnesota at the age of 80.

All content from Kiddle encyclopedia articles (including the article images and facts) can be freely used under Attribution-ShareAlike license, unless stated otherwise. Cite this article:
Dennis Banks Facts for Kids. Kiddle Encyclopedia.