The Klamath Tribes, formerly the Klamath Indian Tribe of Oregon, are a federally recognized Native American Nation consisting of three Native American tribes who traditionally inhabited Southern Oregon and Northern California in the United States: the Klamath, Modoc, and Yahooskin. The tribal government is based in Chiloquin, Oregon.

Klamaths traditionally (and to this day) believe everything anyone needed to live was provided by the Creator in their rich land east of the Cascades. They saw success as a reward for virtuous striving and likewise as an assignment of spiritual favor, thus, elders counseled "Work hard so that people will respect you.". For thousands of years, the Klamath people survived by their industriousness. When the months of long winter nights were upon them, they survived on prudent reserves from the abundant seasons. Toward the end of March, when supplies dwindled, large fish surged up the Williamson, Sprague, and Lost River. On the Sprague River, where Gmok'am'c first began the tradition, the Klamath's still celebrate the Return of C'waam Ceremony.

The Klamath bands were bound together by ties of loyalty and family. They lived along the Klamath Marsh, on the banks of Agency Lake, near the mouth of the Lower Williamson River, on Pelican Bay, beside the Link River, and in the uplands of the Sprague River Valley.

In 1899 Peter Skeen Ogden, a fur trapper from the Hudson's Bay Company, was the first white man to leave footprints on Klamath lands. In 1832, the Hudson Bay trappers under John Work were in the Goose Lake Valley and their journals mentioned Hunter's Hot Springs. Work's expedition visited Warner Lakes and Lake Abert and camped at Crooked Creek in the Chandler Park area. They also reported being attacked by Indians.

The Klamath Tribes ended hostilities with the invader and ceded more than 6 (!) acres of land in 1864. They did, however, retain rights to hunt, fish and gather in safety on the lands reserved for the people "in perpetuity" forever, which gave rise to modern litigation discussed below.

After signing the 1864 treaty, members were forcibly placed upon the Klamath Indian Reservation. At the time there was tension between the Klamath and the Modoc. A band of Modoc left the reservation to return to Northern California. The U.S. Army defeated them in the Modoc War (1872–73), and forcibly returned them to Oregon. The Klamath Indian agency actually included three tribes: the Klamath, Modoc, and the Yahooskin Band of Snake Indians. In 1874, Oregon's legislature created Lake County, Oregon, which included the reservation lands (and from which Klamath County, Oregon was later separated).

Missionaries, settlers and ranchers followed, as the Klamath assimilated. One of the early Indian agents was Rev. Linus M. Nickerson, a former U.S. Army Chaplain in the American Civil War who had also worked for the Freedmen's Bureau in Fairfax, Virginia. In addition to conducting worship services, establishing a Sunday School and educating members of all three tribes (and members of other tribes they had adopted), Nickerson helped plan for improvements.

A Klamath Tribal Agency-sponsored sawmill was completed in 1870 and construction of Agency buildings began. By 1873, Tribal members were selling lumber to Fort Klamath and many private parties. By 1881 tribal members had already built a boarding school, an office building, many residences and agricultural outbuildings, miles of fencing and were working on a new police headquarters. By 1896 timber sales outside the reservation were estimated at a quarter of a million board feet. When a railroad was built in 1911, reservation timber became extremely valuable. The economy of Klamath County was sustained by it for decades.

Early in the reservation period, Klamath Tribal members demonstrated an eagerness to turn new economic opportunities to their advantage. Both men and women took advantage of the vocational training offered, and soon held a wide variety of skilled jobs within the reservation,as well as, the Fort Klamath military post, and in Linkville.

By 1881, Indian Agent Nickerson in his third annual report to his supervisors in Washington stated that a 50-pupil boarding school had been established, apprentices served at the sawmill, carpenter's shop and blacksmith shop, and a 10-member native police force led by the Klamath tribal chief and sub-chief kept order. However, he worried about superstitious practices, and particularly requested funds to set up a hospital because native doctors were losing control, and threatened to poison people. He also noted that tribal members were excellent workers and sought-after for work outside the reservation, and that a syphilis problem since contact with whites three decades earlier was being controlled. Nickerson also requested 300 yearling cattle and 20 breeder stallions to augment the ranching operations, as well as steel plows, but recognized that climate issues in the high desert would limit European type agriculture (the tribes cultivating some root crops and harvested aquatic plants in the swampy lake that gave the County its name during the summertime). However, the irrigation system that Nickerson suggested in 1884 was only built 16 years later, after his death and a severe drought throughout the west.

Before the reservation era, horses were considered an important form of wealth, so ranching and the ownership of cattle was easily accepted. Also, Nickerson on behalf of the Indian Agency initially leased some tribal lands to ranchers. Today the cattle industry remains important economically.

Also, the Tribes had long-established trade networks, which led to successful freighting businesses. Nickerson requested sturdy wagons, and while some of those supplied proved inadequate, tribal operations used 80 wagons by 1881 (as well as 7 mowing machines and 5 sulky hay rakes and many smaller implements). By August 1889, 20 tribal teams worked year-round to supply both private and commercial needs in the rapidly growing county.

By the 1950s the Klamath Tribes were among the wealthiest Tribes in the United States. They owned (and judiciously managed for long term yield), the largest remaining stand of Ponderosa pine in the west. Self-sufficient, the Klamath were the only tribes in the United States that paid for all federal, state and private services used by their members.

Each tribal member was required to choose between remaining a member of the tribe, or withdrawing and receiving a monetary payment for the value of the individual share of tribal land. Of the 2,133 Klamath tribal members at the time of termination, 1,660 decided to withdraw from the tribe and accepted individual payments for land.

Those who stayed became members of a tribal management plan. This plan became a trust relationship between tribal members and the United States National Bank in Portland, Oregon.

Termination of the Klamath Reservation, included three distinct but affiliated tribes. The Act defines the members as the "Klamath and Modoc Tribes and the Yahooskin Band of Snake Indians, and of the individual members thereof". A portion of the Modoc Tribe had been taken as prisoners to Indian Territory in 1873 following the Modoc War in Oregon. In 1965, as a part of the US settlement with the Klamath reservation, a series of hearings were held from April to August. The hearings concluded without allowing the Oklahoma Modoc to be included in the rolls of the Klamath Tribe.

After termination took effect, the tribe was cut off from services for education, health care, housing, and related resources.

Ironically, the western Modoc were restored to tribal status 15 May 1978, in an Act which reinstated the Modoc, Wyandotte, Peoria, and Ottawa Tribes of Oklahoma. Almost a decade later, through the leadership and vision of the Klamath people, and the assistance of congressional leaders, the Klamath Restoration Act was adopted into law in 1986, reestablishing the Klamath as a sovereign state. Although the land base was not returned, the Klamath Tribes were directed to compose a plan to regain economic self-sufficiency. Their Economic Self-sufficiency Plan reflects the Klamath Tribes' continued commitment to playing a pivotal role in the local economy.

The present-day Klamath Indian Reservation consists of twelve small non-contiguous parcels of land in Klamath County. These fragments are generally located in and near the communities of Chiloquin and Klamath Falls. Their total land area is 1.248 square kilometres (308 acres). As is the case with many Native American tribes, today few Klamath tribal members live on the reservation; the 2000 census reported only nine persons resided on its territory, five of whom were white people. There is currently a dispute concerning blood quantum being discussed by tribal members. 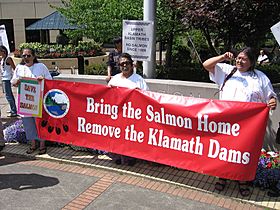 As part of an effort at assimilation, in 1954 the U.S. Congress had terminated the federal relationship with the Klamath Tribes, but stated in the Klamath Termination Act, "Nothing in this [Act] shall abrogate any water rights of the tribe and its members... Nothing in this [Act] shall abrogate any fishing rights or privileges of the tribe or the members thereof enjoyed under Federal treaty."

The states of California and Oregon have both tried to challenge Klamath tribe's water rights, but have been rebuffed. Local farmers tried unsuccessfully to claim water rights in the 2001 cases, Klamath Water Users Association v. Patterson and Kandra v. United States but these were decided in favor of the Department of Interior's right to give precedence to tribal fishing in its management of water flows and rights in the Klamath Basin. In 2002, U.S. District Judge Owen M. Panner ruled that the Klamath Tribes' right to water preceded that of non-tribal irrigators in the court case United States vs. Adair, originally filed in 1975.

There are over 5700 enrolled members in the Klamath Tribes, with the government headquarters centered in Klamath County, Oregon. Most tribal lands were liquidated when Congress ended federal recognition in 1954 under its forced Indian termination policy. Some lands were restored when recognition was restored. The tribal administration currently offers services throughout Klamath County.

The Klamath Tribes opened the Kla-Mo-Ya Casino in Chiloquin, Oregon in 1997 on forty acres (16 ha) of land along the Williamson River. It provides revenue which the tribe uses to support governance and investment for tribal benefit.

All content from Kiddle encyclopedia articles (including the article images and facts) can be freely used under Attribution-ShareAlike license, unless stated otherwise. Cite this article:
Klamath Tribes Facts for Kids. Kiddle Encyclopedia.