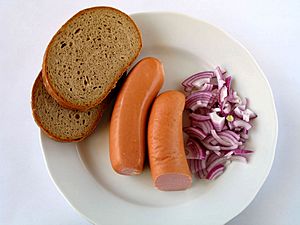 Knackwurst, (in North America spelled knockwurst) refers to a sausage type of northern German origin from the mid-16th century. There are many different available varieties depend on the geographical region of their production.

Knockwurst in the US 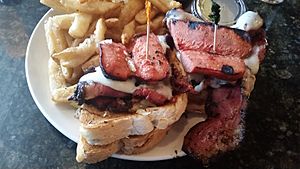 Knockwurst on a Sailor sandwich

As part of the production process, the sausages are aged for two to five days, then smoked over oak wood. Knockwurst is often prepared highly seasoned.

Knockwurst is sometimes cut in half lengthwise before serving, for example when served on a sailor sandwich. 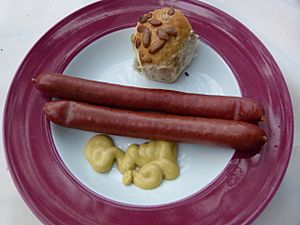 Numerous regional varieties of knackwurst exist in Germany. They all differ from knackwurst varieties sold in Austria. There, a knackwurst always refers to a sausage containing bacon and added potato starch. In addition to the term "knackwurst," common names are "Salzburger" or "Schübling."

As a specialty in Hamburg, scalded Knackwurst served with mustard and half a slice of white bread is a popular snack for lunch. It is also sold at the Hamburger Dom, the largest Volksfest in northern Germany.

All content from Kiddle encyclopedia articles (including the article images and facts) can be freely used under Attribution-ShareAlike license, unless stated otherwise. Cite this article:
Knackwurst Facts for Kids. Kiddle Encyclopedia.