Kondinin is a town located in the eastern Wheatbelt region of Western Australia, 279 kilometres (173 mi) east of the state capital, Perth via the Brookton Highway and State Route 40 between Corrigin and Hyden. It is one of three towns in the Shire of Kondinin. At the 2006 census, Kondinin had a population of 311.

The first European known to have visited the Kondinin area was Captain John Septimus Roe, Surveyor General of the Swan River Colony on his 1848–1849 expedition to examine the south coast. He encountered a group of Aborigines 55 kilometres (34 mi) east of Nalyaring (near Brookton) who guided the expedition party to several water sources before leaving the party at Yeerakine (just south-east of Kondinin) as this was the limit of their territory. The lake and well nearby came to be known as Kondinin, although the meaning is unknown.

In the early years, settlers occasionally encountered groups of Aborigines hunting possums. Although artifacts such as grinding stones and stone choppers have been found in the district, no signs of permanent occupation were found by early settlers other than the mia-mias built by "Europeanised" Aboriginal shepherds from Narrogin in the employ of Michael Brown.

Michael Brown, a businessman from Narrogin, took up large pastoral leases in the Kulin/Kondinin area in 1905. These and other leases in the area were terminated in 1909/1910 to allow the government to distribute the land for agricultural purposes.

The town of Kondinin began life as a railway station on the railway line from Yilliminning (near Narrogin) to Kondinin, built from 1911 to 1915. The district around Kondinin was already settled when the government chose to construct a railway line here in 1911. 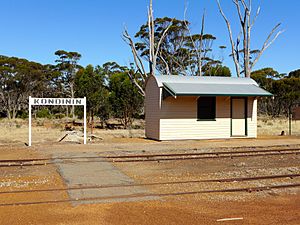 The townsite was gazetted in 1915.

In 1949 the bulk wheat bin in town and another at Notting, located about 2 miles (3 km) from Kondinin, were both filled after a good season with excellent yields in the area despite the recorded rainfall of the previous year being only 10 inches (254 mm).

Kondinin has a population of about 300 and is a key agricultural centre for a district whose main activities are wheat and sheep farming. It contains a TAFE centre, and in addition, a primary school (the nearest high school being 23 km away in Kulin), National Australia Bank, Bankwest, shopping facilities, accommodation (hotel, motel, caravan park), council offices and a telecentre.

The town is a stop on the Transwa bus service to Esperance.

It is also known as the ‘Home of the Group’ – the Kondinin Group, a farm improvement group which originated in Kondinin in 1955 and now has its head office in Perth, and has other offices in Queensland, NSW, Victoria and South Australia. The Kondinin Group was formed as a self-help farmer group to study farm machinery reliability in the wheatbelt of Western Australia. It grew substantially in the 1990s and since 2000 has had about 10,000 members from mostly large scale cropping and livestock enterprises. Research suggests that the Kondinin Group has had a significant impact on the farm practices of its members. In surveys, it was preferred over consultants, suppliers, state departments of agriculture and accountants as a source of reliable and impartial information. The Kondinin Group runs an online bookstore; that sells manuals on practical farm skills, teaching guides on agricultural industries and other materials; and a magazine, both of which are used to disseminate Kondinin Group's research and related training. The community of Kondinin, through its historical innovation, continues to have a major impact on broadacre agriculture throughout Australia and is an acknowledged influence on agricultural extension throughout the world. This is recognised by Kondinin's continued use as the brand name of the group.

All content from Kiddle encyclopedia articles (including the article images and facts) can be freely used under Attribution-ShareAlike license, unless stated otherwise. Cite this article:
Kondinin, Western Australia Facts for Kids. Kiddle Encyclopedia.