Eucalyptus kondininensis, commonly known as Kondinin blackbutt, is a species of tree that is endemic to Western Australia. It has rough, black bark on the trunk, smooth grey to white bark on the branches, lance-shaped adult leaves, flower buds in groups of seven, white flowers and cup-shaped to conical fruit. 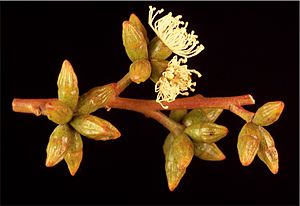 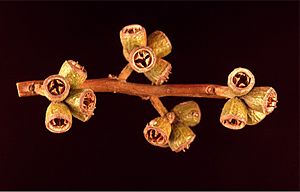 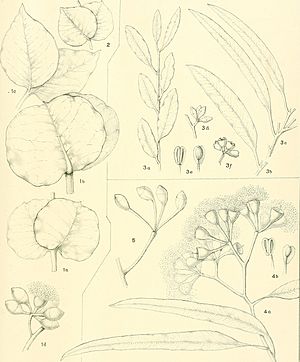 illustration from A Critical Revision of the Genus Eucalyptus (Joseph Maiden)

Eucalyptus kondininensis was first formally described by Joseph Maiden and William Blakely in 1925 in the Journal and Proceedings of the Royal Society of New South Wales. The specific epithet is in reference to town of Kondinin, the area in which tree is found.

The tree belongs in subgenus Symphyomyrtus section Dumaria to a large sub-group, the series Rufispermae, composed of 37 described species and subspecies including E. striaticalyx, E. gypsophila and E. repullulans.

Kondinin blackbutt is found on rocky rises, on salt flats and around salt lakes in inland areas of the Wheatbelt and Goldfields-Esperance regions of Western Australia where it grows in loamy-sandy-clay soils over laterite. It has a scattered distribution from around Pingelly in the west to Ravensthorpe in the east and from Lake King in the north to Nyabing in the south.

All content from Kiddle encyclopedia articles (including the article images and facts) can be freely used under Attribution-ShareAlike license, unless stated otherwise. Cite this article:
Kondinin blackbutt Facts for Kids. Kiddle Encyclopedia.