Korematsu v. United States was a landmark United States Supreme Court. It concerned the constitutionality of military commanders, under an executive order by the President, which ordered Japanese Americans into internment camps during World War II. This was regardless of their citizenship.

In February of 1942, President Franklin Roosevelt issued Executive Order No. 9066. This gave military commanders the power to evacuate all persons considered a threat to national security from the West Coast of the United States to relocation centers.

Fred Korematsu, a Japanese-American who was born in the United States, refused to comply with the order. He became a fugitive, but was arrested and sentenced to five years probation. He appealed his conviction with the Ninth Circuit Court of Appeals. After having his conviction upheld, the case was heard by the U.S. Supreme Court. In a 6-3 decision, the Court upheld his conviction and ruled the exclusion order was constitutional.

The question before the Court was did the President and Congress exceed their powers. Did they violate the rights of Japanese and American citizens of Japanese descent.

In the majority opinion by Justice Hugo Black, the Court ruled 6-9 that the need to protect the country from espionage outweighed the rights of Mr. Korematsu. The issue of discrimination against a person due to prejudice against his ancestry is not a factor. Neither is there any question of his loyalty to the United States. The sole issue is his refusal to comply with a legal order during a time of war. 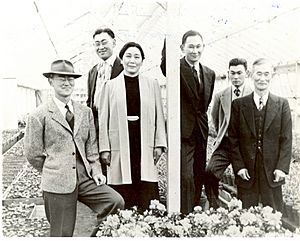 On May 19, 1942, during World War II, Japanese Americans were ordered to be move into relocation camps. Fred Korematsu was a Japanese-American man who decided to stay in San Leandro, California and knowingly disobeyed the order of the U.S. Army. Korematsu argued that the order was unconstitutional and that it violated the Fifth Amendment to the United States Constitution. He was arrested, tried and convicted. No question was raised as to Korematsu's loyalty to the United States. T

The decision in Korematsu v. United States has been very controversial.Korematsu's conviction for evading internment was overturned in 1983. He received the Presidential Medal of Freedom in 1998 from President Bill Clinton.

All content from Kiddle encyclopedia articles (including the article images and facts) can be freely used under Attribution-ShareAlike license, unless stated otherwise. Cite this article:
Korematsu v. United States Facts for Kids. Kiddle Encyclopedia.