Mom Rajawongse Kukrit Pramoj (Thai: คึกฤทธิ์ ปราโมช, RTGS: Khuek-rit Pramot 20 April 1911 – 9 October 1995) was a Thai politician, scholar and professor. He was Speaker of the House of Representatives of Thailand 1973–1974. He was the thirteenth Prime Minister of Thailand, serving in office from 1975 to 1976 between Seni Pramoj, his brother's, terms. Being the great-grandson of King Rama II, he was a member of the Thai royal family. He also portrayed the Prime Minister of the fictional country of "Sarkhan" in the 1963 motion picture The Ugly American with Marlon Brando.

He was born on 20 April 1911 at Sing Buri Province into an cadet branch of Chakri Dynasty with Chinese ancestry. The son of Brigadier General Prince Khamrob and his wife Daeng (Bunnag), his older brother was M.R. Seni Pramoj while his great-grandmother, Ampha, was of Chinese descent and was a consort of Rama II. He served as a corporal during the Franco-Thai War in 1940. Like many upper class Thais of his generation, his parents sent him and his siblings to boarding schools in England including Trent College. He finished his bachelor's degree in Philosophy, Politics, and Economics (PPE) from Queen's College, University of Oxford.

Upon returning to Thailand, his first job was in the field of banking; but his true vocation was his mastery of many forms of arts, including politics and journalism. Put off by Hollywood's portrayal of revered nineteenth-century king, Mongkut, in the 1946 film Anna and the King of Siam, based on the semi-fictional biographical novel of the same name, Kukrit and his brother, Seni Pramoj, wrote The King of Siam speaks in 1948. They sent their manuscript to the American politician and diplomat Abbot Low Moffat who drew on it for his biography entitled Mongkut the King of Siam (ISBN: 974-8298-12-4), and in 1961, donated the Pramoj manuscript to the Southeast Asian Collection, Asian Division, Library of Congress. He wrote for Siam Rath, the newspaper that he founded. 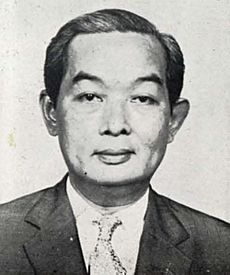 As a means of showing how Thai society adjusted to life in modern society, in 1953 Kukrit began a series of stories on the life and times of fictional Mae Ploy (Thai: แม่พลอย). who as a young girl enters the service of a princess of Rama V's Royal Household, and dies the same day as Rama VIII. This story was to be one of many that were published in the Kukrit's Siam Rat. His satirical sense and unique sense of humour offered an incisive view of the times Kukrit chronicled.. As a scholar, he also wrote many non-fiction works ranging from history and religion to astrology. Most notable are his epics and many short stories portraying various aspects of life and documenting contemporary history. His Many Lives (หลายชีวิต, Lai Chiwit) was also translated into English. He was a leading authority on traditional Thai culture and had a polymathic range of interests from Thailand's classical dance to literature. Most famous for his literary works, he was named a National Artist of Thailand for literature in 1985, the inaugural year for the honour. And he received The Special Commemorative Prize of The Fukuoka Asian Culture Prizes in 1990, the inaugural year for the prizes again. His works encompass many subjects from humour to drama. He was also known as a staunch loyalist and served the monarchy for his entire life. He is considered one of the great statesmen of Thailand. His former home is now a heritage museum which is preserved; paying homage to his life and Thai traditions.

He was married to M.R. Pakpring Thongyai with whom he had two children, a son and daughter. He died on 9 October 1995. 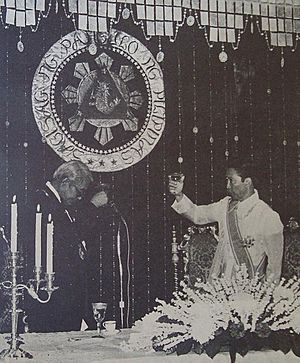 When George Englund decided to use Thailand as the location for the fictional country portrayed in his film The Ugly American, Kukrit was appointed as cultural advisor to make sure the film accurately portrayed monarchy in a Buddhist country. Englund had difficulty casting the part of the fictional Prime Minister, but he was so impressed by Kukrit's cultural refinement and mastery of English that he offered him the part, saying, "I can't think of anyone who could play it better." Kukrit accepted, saying, according to Englund, "We are all actors anyway, and I think you're right that I could play it better than anyone." Probably because of this, after he became a real-life Prime Minister of Thailand in 1975, the word "Sarkhan" has entered the Thai language as a nickname of Thailand itself, often with a slight self-deprecating or mocking tone.

The home that M.R. Kukrit built for himself in Bangkok has been registered by the Department of Fine Arts as 'Home of an Important Person'. It is open to the public on Saturdays, Sundays and official Thai holidays. Standing in 2 acres (8,100 m2) of land, surrounded by landscaped gardens, the house is a similar concept to the Jim Thompson House in Bangkok. Five small traditional Thai houses were dismantled and reassembled at the present site to make one house. The house is filled with artefacts and books collected by the owner. Additions to the original house include air conditioning, a modern bathroom, and a lift was installed when the owner became too frail to climb up and down stairs. The M.R. Kukrit Heritage Home is situated at 19 Soi Phra Pinit, South Sathorn Road, Sathon District, Bangkok 10120.

Kukrit Pramoj is perhaps best known in Thailand for his literary production, particularly his novel Four Reigns, which was published as a serial in his newspaper Siam Rat in 1950. Four Reigns tells the story of "Mae Ploi," a young girl who grew up in the court of King Chulalongkorn (Rama V) where she was an attendant to one of the princesses. Kukrit extends her story after her marriage during the reign of Rama VI, and in the process tells the story of mid-twentieth century Thailand through Mae Ploi's eyes. The story includes the reigns of four Kings of the Chakri dynasty (thus the title "Four Reigns"), and the 1932 Revolution against the absolute monarchy. Four Reigns was translated into English by Tulachandra. The Thai version of Four Reigns continues to be well-known to Thais in the twenty-first century because it has been used in Thai schools, and has been produced as a well-known films.

Only two other of Kukrit's many novels, Many Lives, and Red Bamboo are translated into English. In addition, there is a compilation of Kukrit's English language writings and interviews, M. R. Kukrit Pramoj, His Wit and Wisdom, compiled by Vilas Manivat, and edited by Steve Van Beek. However, Kukrit's writings in the Thai language are voluminous, and include both fiction and non-fiction. Much of Kukrit's writing was first published as either columns or serials in the Siam Rat. A number of the books serialized and later turned into books including Four Reigns. A wide range of subjects were addressed in these books, including contemporary politics, Kukrit's love of dogs, Thai history, Southeast Asian history, elephants, a history of the Jews, and many other subjects.

Most Thai were shocked by the portrayal of their revered nineteenth-century king, Mongkut, in the musical The King and I. The stage and screen versions were based on Margaret Landon's 1944 book entitled Anna and the King of Siam. To correct the record, well-known Thai intellectuals Seni and Kukrit Pramoj wrote this account in 1948. The Pramoj brothers sent their manuscript to the American politician and diplomat Abbot Low Moffat (1901-1996), who drew on it for his biography entitled Mongkut the King of Siam (1961) ISBN: 974-8298-12-4. Moffat donated the Pramoj manuscript to the United States Library of Congress in 1961. (Southeast Asian Collection, Asian Division, Library of Congress)

All content from Kiddle encyclopedia articles (including the article images and facts) can be freely used under Attribution-ShareAlike license, unless stated otherwise. Cite this article:
Kukrit Pramoj Facts for Kids. Kiddle Encyclopedia.