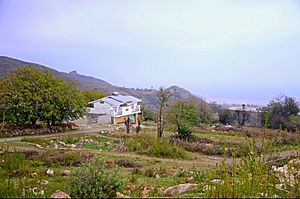 The Kurrum River or Karam River flows in the Kurrum Valley, stretching across the Afghan-Pakistani border west to east (crosses from the Paktia Province of Afghanistan into the Kohat border region of Pakistan) at 33°49′N 69°58′E, about 150 km west-to-south-west of the Khyber Pass.

The Tochi river, sometimes referred to as the Gambila River is in North Waziristan, Federally Administered Tribal Areas, Pakistan. The source of the river are the hills six miles south of the Sufed Koh River, the source of the Kurrum River, which it runs parallel to and finally joins.

Tochi river flows eastward, in North Waziristan, to join the Kurrum River and the Indus. It is an important river for the inhabitants of the Dawar valley, as it serves to irrigate a large area of land that it runs through. Particularly that belonging to the Bakkakhel Wazirs, and Miri and Bannuchis.

All content from Kiddle encyclopedia articles (including the article images and facts) can be freely used under Attribution-ShareAlike license, unless stated otherwise. Cite this article:
Kurrum River Facts for Kids. Kiddle Encyclopedia.