Kids Encyclopedia Facts
This page is about the amusement park. For other uses, see Kursaal.

The Kursaal is a Grade II listed building in Southend-on-Sea, Essex, England, which opened in 1901 as part of one of the world's first purpose-built amusement parks. The venue is noted for the main building with distinctive dome, designed by Campbell Sherrin, which has featured on a Royal Mail special edition stamp. 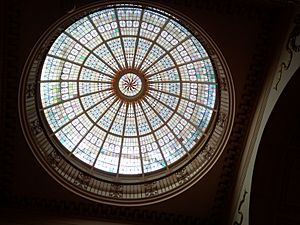 Interior look of the Kursaal dome

The Kursaal site was opened in 1894 by father and son Alfred and Bernard Wiltshire Tollhurst on four acres of land purchased the previous year, as the 'Marine Park and Gardens'. In July 1901 they opened a grand entrance pavilion, the Kursaal Palace, designed by George Sherrin and John Clarke, containing a circus, ballroom, arcade, dining hall and billiard room. The word Kursaal is German, meaning a "Cure Hall" or spa, and it seems to have been adapted to mean a place of healthy amusement. Southend's Kursaal became the largest fairground in the south of England.

The owner of the park, Kursaal Ltd, was liquidated following financial crises but the park continued to run. Eventually in 1910 the Kursaal was bought by Luna Park and Palace of Amusements (Southend) Ltd, which had been registered on 14 March 1910 by William Hilton. The park was renamed accordingly to Luna Park, and Hilton became the Managing Director of the park. Hilton opened a large list of attractions, including the Harton Scenic Railway and Figure of Eight roller coasters, a miniature railway, Astley's circus and a cinema.

Luna Park was claiming 100,000 visitors per week, however a June 1911 fire destroyed two of the park's most notable attractions, the Joy Wheel and the Figure of Eight Railway Coaster. By 1912 trustees had taken over Hilton's company, and the Luna Park Company was dissolved in 1915.

In 1915 American industrialist Clifton Jay Morehouse became the new owner of the park. Morehouse had arrived in London in 1897, settling in Birmingham later. He reinstated the park's original title of the 'Kursaal' and converted the circus into a ballroom and ice rink. He led the park to become one of the most successful in England at the time, establishing local sporting events and trade exhibitions. In 1916 a zoo housing bears, tigers and wolves was opened at the 4-acre (1.6-ha) site, however it was closed following the start of World War II.

In 1929 11 people were seriously injured on the Flying Boat ride. In 1934 David de Forrest Morehouse died and a board of trustees took over the Kursaal. The Kursaal was closed to the public during World War II. 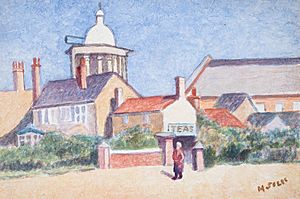 The Kursaal, Southend painted by Henry Silk, circa 1930

In 1927 two Scotsmen named Jimmy Shand and Tom Wilson approached Southend United F.C., who played at the Kursaal, and agreed a deal to start greyhound racing on 27 July. The first meeting attracted 5,000 spectators and the first race was won by a greyhound called Self Starter at odds of 2–1 over 500 yards. The meeting was opened by the Deputy Mayor Alderman H A Dowsett and fifty track bookmakers attended. The racing was independent (not affiliated to the sports governing body the National Greyhound Racing Club).

John Bilsland then added his name to the venture, but it only operated for two years before the entire enterprise (including greyhounds) was moved by train to the Stanley Stadium in Liverpool, due to increased rent demands. The football club remained there until 1934, when they moved to Southend Stadium.

In 1948 C. J. Morehouse II took over the Kursaal from the trustees. The ballroom of the Kursaal had hosted all manner of musical artistes following its opening in 1901. During the 1970s it made its name as Southend's preeminent rock music venue, showcasing internationally successful acts such as Black Sabbath, Deep Purple, Thin Lizzy, Queen and AC/DC. A photograph of the latter performing at The Kursaal in 1977 was used on the front cover of their Let There Be Rock album.

The Kursaal as a whole had been in gradual decline since the early 1970s, with the outdoor amusements closing in 1973. At the end of 1977 the decision was made to close the ballroom, with the main building finally succumbing in 1986. The outdoor amusement area was later redeveloped for housing.

In 1998 the main Kursaal building was reopened after a multimillion-pound redevelopment by the Rowallan Group containing a bowling alley, a casino and other amusements. The building originally contained a McDonald's, but the fastfood chain left in 2008.

All content from Kiddle encyclopedia articles (including the article images and facts) can be freely used under Attribution-ShareAlike license, unless stated otherwise. Cite this article:
Kursaal (amusement park) Facts for Kids. Kiddle Encyclopedia.