Alder was born in the industrial area of Königshütte, Silesia (modern day Chorzów, Upper Silesia, Poland). He received his early schooling there. Alder left the area for political reasons when Königshütte became part of Poland in 1922. He studied chemistry at the University of Berlin from 1922, and later at the University of Kiel where his earned a PhD in 1926 for work supervised by Diels.

In 1930 Alder was appointed reader for chemistry at Kiel, and promoted to lecturer in 1934. In 1936 he left Kiel to join I G Farben Industrie at Leverkusen, where he worked on synthetic rubber. In 1940, he was appointed Professor of Experimental Chemistry and Chemical Technology at the University of Cologne and Director of the Institute of Chemistry there. Throughout this time and despite the many obstacles to original research in Europe at the time, he continued a systematic program of investigations of his particular interests in the synthesis of organic compounds. In all he published more than 151 papers in this field.

Alder received several honorary degrees and other awards, most famously the 1950 Nobel Prize in Chemistry which he shared with his teacher Diels for their work on what is now known as the Diels–Alder reaction. The lunar crater Alder is named in his honour. The insecticide aldrin, created through a Diels–Alder reaction, is also named for him. 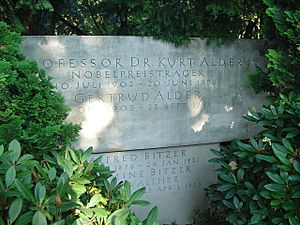 All content from Kiddle encyclopedia articles (including the article images and facts) can be freely used under Attribution-ShareAlike license, unless stated otherwise. Cite this article:
Kurt Alder Facts for Kids. Kiddle Encyclopedia.