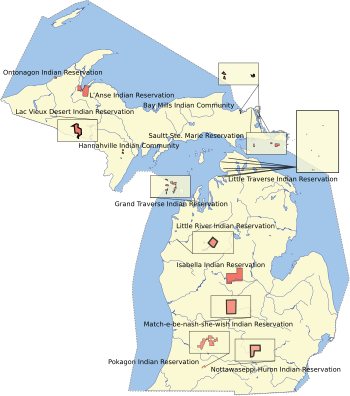 The L'Anse Indian Reservation is the land base of the federally recognized Keweenaw Bay Indian Community of the historic Lake Superior Band of Chippewa Indians. (The Keweenaw Bay Indian Community was defined in 1934 by the Indian Reorganization Act as the successor apparent of the L’Anse and Ontonagon bands). The reservation is located primarily in two non-contiguous sections on either side of the Keweenaw Bay in Baraga County in the Upper Peninsula of the U.S. state of Michigan.

The total land area of the reservation is 92.132 sq mi (238.622 km²). As of the 2000 census, 3,672 persons resided in this territory, of whom more than 69 percent self-identified as white people. Some 24.4 percent identified as being Native American. Most of the village of Baraga and part of the village of L'Anse are on reservation land. In 1999, tribal enrollment was 3,159 according to the Bureau of Indian Affairs 1999 Labor Force Report.

This area was historically the territory of the L'Anse Band of the Lake Superior Band of Chippewa Indians, a large, decentralized group of loosely associated bands around southern Lake Superior.

The European-American community of L'Anse developed around a French fur trading post set up in colonial times at the site of an Ojibwa village on the bay. It continued to develop after the British took control of New France following the Seven Years' War. After the War of 1812 between Britain and the United States, negotiations settled the border with Canada, and this area became part of the United States.

As European-American settlers moved into Michigan in the early 19th century, the United States increased pressure on the Lake Superior Band of Ojibwa to cede their lands to allow unrestricted development. The Treaty of 1842, by which the Chippewa ceded lands to the federal government, was one of the largest land cession agreements ever made between the U.S. federal government and Indian tribes. It includes provisions and stipulations that the Chippewa retain their rights to fish, hunt and gather on these ceded lands.

The L’Anse Reservation is both the oldest and largest reservation in Michigan. It was established under the Chippewa Treaty of 1854. The United States Supreme Court has interpreted this treaty as creating permanent homelands for the Chippewa (Ojibwa Anishnaabeg) band signatories to the treaty. The US ultimately acquired land and set up other reservations in Michigan for Chippewa based on this treaty, for instance for the Bay Mills Indian Community.

The L’Anse Reservation consists of 54,000 acres (220 km²) with approximately 14,000 acres (57 km²) owned by the tribal community. Two thirds of the land is held in tribal common ownership and the remaining third is owned by Indians in fee, restricted fee, or allotted lands status. The entire reservation encompasses nearly one third of the area of Baraga County.

The Keweenaw Bay Indian Community establishes its own membership rules for the tribe.

The Keweenaw Indian Community operates a fish hatchery at Pequamining Bay on Lake Superior. It works to improve and preserve water quality in the lake to support fish and other natural populations.

The tribe also operates two casinos, the Ojibwa I on reservation land in Baraga County, and the Ojibwa II in a residential neighborhood in Chocolay Township, Marquette County. A 2000 land claims settlement with the state required the tribe to relocate the latter casino. The tribe proposed moving it to the defunct Marquette County Airport. As of December 2012 the location remained unsettled.

All content from Kiddle encyclopedia articles (including the article images and facts) can be freely used under Attribution-ShareAlike license, unless stated otherwise. Cite this article:
L'Anse Indian Reservation Facts for Kids. Kiddle Encyclopedia.