La Cienega is a census-designated place (CDP) in Santa Fe County, New Mexico, United States. It is part of the Santa Fe, New Mexico, metropolitan statistical area. The population was 3,007 at the 2000 census.

La Cienega is located on the site of a Keres pueblo that took part in the 1680 Pueblo Revolt.

According to the United States Census Bureau, the CDP has a total area of 13.4 square miles (35 km2), all land.

The South End of the Rockies Historical Marker, marking the southern terminus of the Rocky Mountains, is about three miles west of La Cienega. 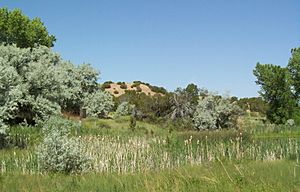 The name La Cienega refers to an important feature, a cienega (spring and associated marsh) that supplies water to El Rancho de las Golondrinas and the Santa Fe River Canyon at the foot of the Caja del Rio. The cienega itself is managed by the Santa Fe Botanical Garden as the Leonora Curtin Wetland Preserve. La Cienega is an Area of Critical Environmental Concern and has been a focus of recent efforts to create an open space corridor between Santa Fe and the Rio Grande.

Previously all of it was zoned to Capital High. In 2017 the district recommended changing the boundary of a section of the area to Santa Fe High.

All content from Kiddle encyclopedia articles (including the article images and facts) can be freely used under Attribution-ShareAlike license, unless stated otherwise. Cite this article:
La Cienega, New Mexico Facts for Kids. Kiddle Encyclopedia.