Ladd's Addition is an inner southeast historic district of Portland, Oregon, United States. It is Portland's oldest planned residential development, and one of the oldest in the western United States. The district is known in Portland for a diagonal street pattern, which is at odds with the rectilinear grid of the surrounding area. Roughly eight blocks (east-west) by ten blocks (north-south) in size (by reference to the surrounding grid), Ladd's is bordered by SE Hawthorne, Division, 12th, and 20th streets. It is part of the Hosford-Abernethy neighborhood association.

Ladd's Addition is named after William S. Ladd, a merchant and mid-19th-century Portland mayor who owned a 126-acre (51 ha) farm on the land. In 1891 (when the city of East Portland was merged into Portland) Ladd subdivided the land for residential use. Rather than follow the standard orthogonal grid of the surrounding area, Ladd, inspired by the L'Enfant Plan for Washington, D.C., created a diagonal "wagon wheel" arrangement, including four small diamond-shaped rose gardens and a central traffic circle surrounding a park. It is also one of the few areas in Portland with alleys, with street elevations mostly uninterrupted by curb cuts. 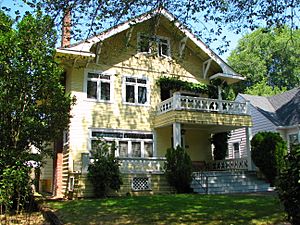 One of the homes in Ladd's Addition, located on SE Elliott Avenue.

The homes in the district, mostly developed between 1905 and 1930 (after Ladd's death), have been called a "architecturally rich mix of compatible early 20th century styles", notable for their "continuity of scale, setback, orientation, and materials." Architectural styles represented include bungalow, craftsman, American Foursquare, Mission, Tudor, and Colonial Revival. 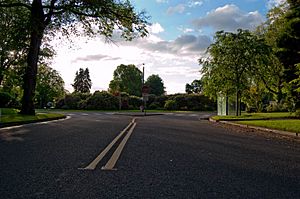 The narrow streets of Ladd's Addition are lined with American Elm trees. The Save Our Elms organization inoculates the elm trees yearly against Dutch elm disease. Each of the four smaller, diamond-shaped "circles" to the east, west, north, and south contains one of Portland's rose test gardens. Friends of Ladd's Addition Gardens regularly solicits money and volunteers to maintain the rose gardens. Ladd named most of the streets after trees, but he named SE Ladd Avenue and SE Elliott Avenue for himself and his wife, who was born Caroline Elliott.

The area was designated a historic district by the National Register of Historic Places in 1988.

All content from Kiddle encyclopedia articles (including the article images and facts) can be freely used under Attribution-ShareAlike license, unless stated otherwise. Cite this article:
Ladd's Addition Facts for Kids. Kiddle Encyclopedia.