Lake Murray is a reservoir in San Diego, California, operated by the City of San Diego's Public Utilities Department. It is located within Mission Trails Regional Park. When full, the reservoir covers 171.1 acres (69.2 ha), has a maximum water depth of 95 feet (29 m), and a shoreline of 3.2 miles (5.1 km). The asphalt-paved service road lining roughly two-thirds of the lake's perimeter is a popular recreation site for the Navajo community. It lies south of Cowles Mountain and is an important reporting point for aircraft inbound to land at Montgomery Field Airport (identifier: KMYF).

The reservoir was formed in 1894 with the construction of an earthen dam, and was known as La Mesa Reservoir. In 1910 the dam and reservoir were bought by Ed Fletcher as part of his Cuyamaca Water Company. Following the great San Diego County flooding in 1916 (associated with the rainmaker Charles Hatfield), the reservoir was the principal source of water for the city of San Diego. In 1919 the dam was enlarged and the capacity of the reservoir greatly expanded. The dam and lake were renamed in 1924 after James A. Murray, one of Fletcher's investors in the water company. Fletcher sold the Cuyamaca Water Company, including Lake Murray, to the La Mesa, Lemon Grove and Spring Valley Irrigation District in 1926. The irrigation district then sold the lake to the city of San Diego in 1932.

At least 149 species of birds have been observed and recorded at Lake Murray. Among other species, the lake supports flocks of the endangered tricolored blackbird. The reservoir also has Florida-strain largemouth bass, bluegill, channel catfish, black crappie, and trout (stocked November–May). 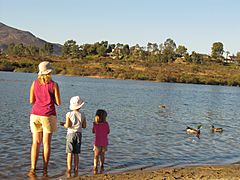 A family feed the ducks at Lake Murray

Lake Murray is a popular site for hikers, cyclists, and runners who travel around the periphery of the lake. It is not possible to cross the dam and complete the loop like nearby Miramar Reservoir but there is 3.2 mi (5.1 km) of path with access at multiple points.

Kayaking and catch-and-release fishing are both allowed on the reservoir. Birdwatchers enjoy visiting Lake Murray where ducks, geese, and herons abound. At least 149 bird species have been observed and recorded here.

Lake Murray is open for shore fishing and private boats, kayaks, and float tubes seven days a week from 5:30 a.m. to 8:00 p.m. On days or times when the concession is closed, patrons can purchase permits from the iron ranger boxes (envelope system) at the lake. The reservoir is stocked with Florida-strain largemouth bass, bluegill, channel catfish, black crappie, and trout. Minimum size limit for bass is 12 inches. Fish limits are five trout, five bass, five catfish, and twenty-five crappie and bluegill in aggregate, with no limit on other species. Anglers 16 years of age or older must have a California state fishing license. Fish catch information is weekly.

All content from Kiddle encyclopedia articles (including the article images and facts) can be freely used under Attribution-ShareAlike license, unless stated otherwise. Cite this article:
Lake Murray (California) Facts for Kids. Kiddle Encyclopedia.