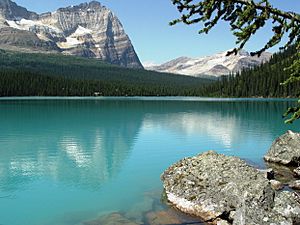 Lake O'Hara is a lake at an elevation of 2,020 metres (6,630 ft) in the alpine area of Yoho National Park, in the province of British Columbia, on the western side of the Great Divide with the province of Alberta and Banff National Park to the east. The lake and the valley are accessible through a bus service that is run by Parks Canada or by an 11 km hike along a road with an elevation gain of approximately 500m. However, people who hike up the road are not guaranteed a bus ride down. People who have reservations have priority for the bus spots for the ride down. Reservations for the bus, for day use, can be made through the Parks Canada Reservation website. Campsite reservations can be made up to three months in advance through the Lake O'Hara reservation line. It is strongly recommended that visitors make reservations in advance, as the bus does fill up and standby bus spots are not sold the day of bus departures.

The area is known for its scenery as well as its alpine hiking. Visitors often follow the climbing trails which ascend from Lake O'Hara to Lake Oesa and to Opabin Lake. The number of people who access the area by bus has been limited in order to preserve the sensitive alpine environment.

The area is named after Colonel Robert O'Hara, an Irishman from Derryhoyle, Galway who heard about the area from J.J. McArthur, a government surveyor.

The Elizabeth Parker Alpine Club Hut is in the Meadows about a 15-minute walk from the Lodge. It is a ski destination in the winter, with many skiers doing it as a day trip.

All content from Kiddle encyclopedia articles (including the article images and facts) can be freely used under Attribution-ShareAlike license, unless stated otherwise. Cite this article:
Lake O'Hara Facts for Kids. Kiddle Encyclopedia.