Mount Huber is a 3,348-metre (10,984-foot) summit located two kilometers east of Lake O'Hara in the Bow Range of Yoho National Park, in the Canadian Rockies of British Columbia, Canada. Its nearest higher peak is Mount Victoria, 1.0 km (0.62 mi) to the north-northeast. Mount Huber is a secondary summit of Mount Victoria which is on the Continental Divide.

Named in 1903 by Samuel Allen for Emil Huber, a Swiss climber, who, with Carl Sulzer, were first to climb Mount Sir Donald in the Selkirk Mountains. The first ascent of the Mount Huber was made in 1903 by George Collier, E. Tewes, Christian Bohren, and Christian Kaufmann. The mountain's name became official in 1924 when approved by the Geographical Names Board of Canada. 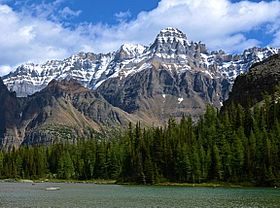 Based on the Köppen climate classification, Mount Huber is located in a subarctic climate with cold, snowy winters, and mild summers. Temperatures can drop below −20 °C with wind chill factors below −30 °C. Precipitation runoff from Mount Huber drains into tributaries of the Kicking Horse River which is a tributary of the Columbia River.

All content from Kiddle encyclopedia articles (including the article images and facts) can be freely used under Attribution-ShareAlike license, unless stated otherwise. Cite this article:
Mount Huber Facts for Kids. Kiddle Encyclopedia.