The first ascent of the mountain was made in 1887 by James J. McArthur, and he named it Odaray which is the expression for "many waterfalls" in the Stoney language. Other reports have it being named in 1894 by Samuel Evans Stokes Allen for the Stoney Indian word for "cone". However, it is possible that McArthur only ascended the lesser secondary summit cone (2965 m) now known as Little Odaray which is southeast of the true summit. The mountain's current name became official in 1952 when the Geographical Names Board of Canada rescinded the name Mount Odaray.

Based on the Köppen climate classification, Odaray Mountain is located in a subarctic climate zone with cold, snowy winters, and mild summers. Temperatures can drop below −20 °C with wind chill factors below −30 °C. Precipitation runoff from Odaray Mountain drains into tributaries of the Kicking Horse River which is a tributary of the Columbia River. 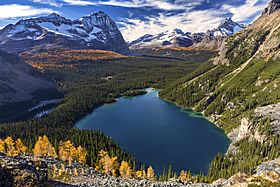 All content from Kiddle encyclopedia articles (including the article images and facts) can be freely used under Attribution-ShareAlike license, unless stated otherwise. Cite this article:
Odaray Mountain Facts for Kids. Kiddle Encyclopedia.