Lake Pillsbury is a lake in the Mendocino National Forest of Lake County, California, created from the Eel River and Hull Mountain watershed by Scott Dam. Elevation is 1,818 ft (554 m) with 65 mi (105 km) of shoreline and covering 2,003 acres (811 ha). Activities in the Lake Pillsbury Recreation Area include powerboating, fishing, swimming, sailing, picnicking, hiking and hang gliding. There are two main access roads to the lake. At the north end of the lake is a small gravel airstrip. Over 400 homes including National Forest Recreational Residences ring this beautiful recreational lake.

In 1906, W.W. Van Arsdale formed the Eel River Power and Irrigation Company and contracted with the city of Ukiah for a hydroelectric generating station to increase electricity supply for the city. A diversion dam was built on the Eel River and a mile-long tunnel was constructed to divert water into the Russian River. A powerhouse was constructed in Potter Valley. It was called the Potter Valley Project or Eel River Project.

Later that year, the Snow Mountain Water and Power Company incorporated and took over the project from Van Arsdale's company. By 1908 water was being diverted to the power plant and then to the Russian River. Part two of the project was building the dam which created Lake Pillsbury, located 12 miles (19 km) upstream.

Scott Dam was completed in 1921 as a concrete gravity structure, 138 feet high, 805 feet long at its crest, and impounding a maximum capacity of 86,400 acre-feet. It maintains water flow to the hydroelectric plant during times of low water runoff. Pacific Gas and Electric Company acquired the project in 1933, and maintains the facilities today. The lake is named for one of the founders of Snow Mountain Water and Power Company. The Pillsbury hydroelectric plant is the only one in the north coast region of California operated by PG&E.

The Eel River Project is now known as the Potter Valley Project.

There are five campgrounds, two group campgrounds, two paved boat ramps and a resort at the lake. The Lake Pillsbury Resort operates a marina with rentals, boat slips and supplies. All types of boating are allowed, including boat camping.

California Department of Fish and Game stock the lake with trout annually. Other fish include black bass, steelhead, and pikeminnow.

The California Office of Environmental Health Hazard Assessment (OEHHA) has developed a safe eating advisory for Lake Pillsbury based on levels of mercury or PCBs found in fish caught from this water body.

Hiking trails at the lake include an interpretive nature trail at Sunset Campground and the 4-mile (6.4 km) Lake Shore Loop Trail. Other nearby recreational opportunities include the Snow Mountain Wilderness located east of Lake Pillsbury. The Bloody Rock historic area is located within the wildlife refuge north of the lake as well as the Eel River and the Wild and Scenic Black Butte River. 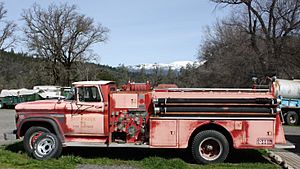 The tule elk is one of the largest land mammals native to California, with cows weighing up to 350 pounds, and the largest bulls weighing roughly 500 pounds. Hunted to near extinction during the California Gold Rush era, the animals were reintroduced to the Lake Pillsbury Basin in the late 1970s by the California Department of Fish and Game, and the herd has steadily grown, numbering around 80 in 2007.

The elk live on the north shore of the lake at the bottom of Hull Mountain, and enjoy wild clovers and grasses, along with the green summer and fall foliage around Lake Pillsbury's edges. Mendocino National Forest and Los Padres National Forest are the only two national forests in California to have tule elk. There is a ten-day hunting season beginning on the second Wednesday in September each year.

All content from Kiddle encyclopedia articles (including the article images and facts) can be freely used under Attribution-ShareAlike license, unless stated otherwise. Cite this article:
Lake Pillsbury Facts for Kids. Kiddle Encyclopedia.