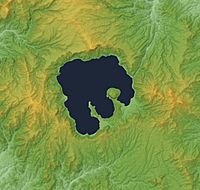 Lake Towada (十和田湖code: ja is deprecated , Towada-ko) is the biggest crater lake on Honshū island, Japan. It is on the border between Aomori and Akita prefectures. It is 400 meters (1,800 ft) above sea level, and it is 327 m (1,073 ft) deep. The Oirase river drains it. It has a surface area of 61.1 km². This makes it Japan's 12th biggest lake. It has a bright blue color because it's very deep. The lake is shaped like a circle. It has two peninsulas starting on its southern shore about one-third into the center of the lake.

The lake is a popular place for tourists.

A World War II Tachikawa Ki-54 airplane of the Imperial Japanese Army Air Force crashed into the lake in 1943. It was found at the bottom of Lake Towada on 13 August 2010. It was taken on September 5, 2012. and has been placed on display.

The lake's symbol, the Otome-no-Zo statue, is in the center of the lake. From there excursion boats arrive and depart. In Utarube, visitors can go canoeing or camping.

All content from Kiddle encyclopedia articles (including the article images and facts) can be freely used under Attribution-ShareAlike license, unless stated otherwise. Cite this article:
Lake Towada Facts for Kids. Kiddle Encyclopedia.