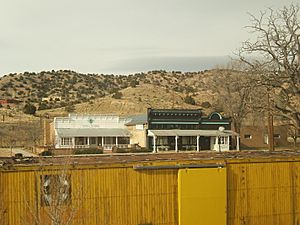 Lamy is a census-designated place (CDP) in Santa Fe County, New Mexico, United States, 18 miles (29 km) south of the city of Santa Fe. The community was named for Archbishop Jean-Baptiste Lamy, and lies within the Bishop John Lamy Spanish Land Grant, which dates back to the eighteenth century.

Lamy is part of the Santa Fe, New Mexico, Metropolitan Statistical Area. The population was 218 at the 2010 census. The former Atchison, Topeka, and Santa Fe Railroad (ATSF), now the Burlington Northern Santa Fe (BNSF), passes through Lamy. This railroad, usually called just the "Santa Fe," was originally planned to run from Atchison, Kansas, on the Missouri River, to Santa Fe, the capital city of New Mexico, and then points west. However, as the tracks progressed west into New Mexico, the civil engineers in charge realized that the hills surrounding Santa Fe made this impractical. Hence, they built the railway line though Lamy, instead. Later on, a spur line was built from Lamy to Santa Fe, bringing the railroad to Santa Fe at last. In 1896 the Fred Harvey Company built the luxurious El Ortiz Hotel here. Thus Lamy became an important railroad junction. In 1992 the spur line was taken over by the Santa Fe Southern Railway, which operated a popular excursion train, using vintage passenger railcars and modern freight cars, between Santa Fe and Lamy. This service concluded in 2014.

The significance of Lamy as a railroad junction is related in the Oscar-nominated documentary, The Day After Trinity (1980), about the building of the first atomic bomb, and is referred to by instrumental group the California Guitar Trio in a five-part suite Train to Lamy on their second album Invitation (1995).

According to the United States Census Bureau, the CDP has a total area of 1.1 square miles (2.8 km2), all land.

There were 55 households, out of which 40.0% had children under the age of 18 living with them, 49.1% were married couples living together, 10.9% had a female householder with no husband present, and 38.2% were non-families. 29.1% of all households were made up of individuals, and 9.1% had someone living alone who was 65 years of age or older. The average household size was 2.49 and the average family size was 3.18.

The Lamy Railroad and History Museum, located in the historic "Legal Tender" restaurant building, is dedicated to preserving local history and heritage, with emphasis on the railroads and their impact on the area. The museum buildings, formerly the Pflueger General Merchandise Store (built in 1881) and the attached Annex Saloon (built in 1884), are listed on the National Register of Historic Places. The Legal Tender Saloon and Restaurant re-opened as the Legal Tender at The Lamy Railroad & History Museum in March 2012, after 14 years. The restaurant and museum are run as a non-profit and the waitstaff are volunteers. It is open Thursday through Sunday.

There are multiple accounts, particularly in the Santa Fe New Mexican at the time (March 26, 1880) of a sighting of a "fish-shaped balloon" which contained "about ten human occupants" from which was heard singing, music, and shouting "in an unknown language". A rose tied to a letter written with "unknown characters" and a cup of "unusual workmanship" were reportedly dropped from the vehicle. According to accounts, the following day a person unknown to residents purchased both items for "a large sum of money", declaring them "of Asiatic origin".

It is zoned to El Dorado Community School (K-8) in El Dorado. Its high school is Santa Fe High School.

All content from Kiddle encyclopedia articles (including the article images and facts) can be freely used under Attribution-ShareAlike license, unless stated otherwise. Cite this article:
Lamy, New Mexico Facts for Kids. Kiddle Encyclopedia.